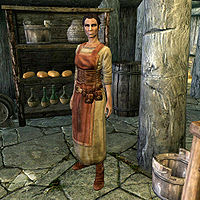 Iddra is a Nord citizen and an innkeeper at the Braidwood Inn in the town of Kynesgrove. She manages the inn, providing room rentals as well as merchant services, and from 8am to 8pm she stands behind the inn's counter to work. Her husband, Kjeld, takes over renting the inn's rooms if she dies. She and Kjeld also have a son, Kjeld the Younger, and a younger daughter, Froa, although she is only mentioned in conversations. Iddra may ask you to talk with one of her customers, Roggi Knot-Beard, about his tab.

Iddra wears a set of merchant clothes and a pair of boots. She is equipped with an iron dagger, and carries a selection of common items and gold.

She greets you warmly.

"I hope you'll stay for a bit. We could certainly use the business."

"This is really quite a nice town when you get down to it. Just look at the view!"

"Got some nice comfy beds at the Braidwood Inn, if you're looking to flop down somewhere."

She may also apologize about her husband, Kjeld.

"Did you see my husband already? I'm sorry... he can come off a bit rough at times."

Should you ask her where you can learn more about magic, she will be disapproving of it, but will be helpful nevertheless.

Where can I learn more about magic?
"Magic is nothing but trouble. If you're set on it, there's that College in Winterhold or Ulfric's court wizard. But don't say I didn't warn you."

Iddra: "If you like mead so much, why not go live in Riften?"
Roggi Knot-Beard: "Oh, I wouldn't be able to help them. Their skills were given by the Divines."
Iddra: "Maybe you could be a taster or something."
Roggi Knot-Beard: "Ah, but I can do that right here. Right now!"

She can be found conversing with her son, Kjeld the Younger:

She may talk about Roggi. Asking her who Roggi is starts you on the quest.

"Poor Roggi. If you're feeling charitable, buy the Nord a mead. He's good for it."
Who's Roggi?
"He's been in Kynesgrove forever. Great storyteller. Keeps everyone's spirits up. Owes me a lot of coin for drinks. I keep telling him not to worry about it, but he's got the stubborn Nord blood. Damn fool doesn't have the coin to pay me back, so he just beats himself up over it, and then he gets thirsty, and it cycles all over again."
Sorry to hear that.

"He'll be fine, I just hate worrying about his worrying."

What if I talk to Roggi?

"If you could convince him that I don't care about his tab, it'd certainly make me feel better."

Offering to help Iddra gives you the objective to speak with Roggi about his debt. Once you've persuaded him to let it go, return to Iddra.

Roggi won't be complaining anymore.
"It'll be good to not have to hear him whining about his debts. Roggi pawned a few of his things back when he still had things to pawn. Take them."

She will reward you with one unenchanted weapon and a piece of armor.

A Blade in the DarkEdit

You and Delphine will travel to Kynesgrove. As you head up the slope towards the Braidwood Inn, Delphine suddenly comes to a halt.

Iddra will come running down the hill, yelling at you to run.

insert conversation between Iddra and Delphine