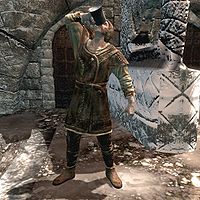 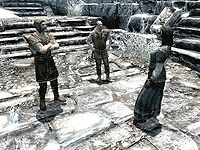 Rolff Stone-Fist is a Nord warrior living in Windhelm who spends much of his day in Candlehearth Hall. He is very hateful towards Dark Elves and Argonians, and he is somewhat convinced that the Dark Elves are Imperial Legion spies or even allied with the Thalmor. His brother is Galmar Stone-Fist, the second-in-command to Ulfric Stormcloak.

Rolff wears a belted tunic, a pair of boots, and a hat. He is equipped with an iron dagger and carries a selection of lower-class loot and gold.

Rolff: "You come here where you're not wanted, you eat our food, you pollute our city with your stink and you refuse to help the Stormcloaks."
Suvaris: "But we haven't taken a side because it's not our fight."
Angrenor: "Hey, maybe the reason these gray-skins don't help in the war is because they're Imperial spies!"
Suvaris: "Imperial spies? You can't be serious!"
Rolff: "Maybe we'll pay you a visit tonight, little spy. We got ways of finding out what you really are."

When first spoken to he will react harshly no matter what race you are: "You. You a Dark Elf lover? Get out of our city, you filthy piece of trash." If you are a Dark Elf, he will say "You damn gray-skin. Go back to Morrowind!" If you comment on his bad attitude, he will challenge you to a brawl: "Don't like it? Too bad. This is our city. Ours! Don't think I can take you? One hundred septims says I can punch you back where you came from." If you accept the challenge, he will say, "All right. Fists only. And none of that magic stuff, either. Let's go!" Winning the brawl will raise his disposition towards you and make him consider you a friend, even if you're a Dark Elf or have sided with the Imperial Legion.

If you ask why he hates the Dark Elves so much, he will say, "They're parasites. They're living in our city, under our protection, but what do they do for us? Nothing! I know the High King invited them here, but he didn't ask me or anyone else first. Maybe he should have." If you ask him if he really believes that the Dark Elves are Imperial spies, he will say, "Wouldn't surprise me. They've done nothing to help in the fight for Skyrim's freedom. Those Thalmor are elves, too. I bet they're working together. Maybe I should round up some men and take us a few prisoners to interrogate."

If you are a Nord, he may exit conversations with "Watch out some gray-skin doesn't pick your pocket." He can sometimes be heard saying "Every night, I walk around the Gray Quarter and let them gray-skins know what I think of 'em." True to his word, he can be found in the Gray Quarter during the night, shouting all kinds of insults: