Talk to Arniel Gane and ask if there is any College business you can assist him with. He'll state that it's nothing official, but he is working on a "project". He refuses to say anything about it, but he asks you to bring him ten Dwemer cogs. They can be found randomly throughout any and all Dwarven ruins. If you have not already found a Dwarven ruin, Alftand is near the College of Winterhold, and the ruin under Markarth is easy to find and lower-level friendly.

There are plenty of Dwemer cogs inside Dwemer Museum in Understone Keep, specifically in the closest right corner from the entrance; with stealthy movement, all cogs can be obtained without any repercussions, making this the easiest and quickest method. The main College quest line will take you to Mzulft, which also has more than ten Dwemer cogs. Depending on the ruins and your carry capacity (cogs weigh 10 each) you may end up needing two or three trips to get all the cogs.

Once you have obtained the ten Dwemer cogs, return to Arniel and he will reward you with a small amount of gold.

Arniel needs a very specific item for his project and is having trouble getting Enthir to give it to him. He'd like you to speak to Enthir and return to him with the item. Speaking to Enthir reveals that the item Arniel wants never belonged to him and is Enthir's property. He agrees to relinquish it, though—if you'll retrieve the Staff of Tandil he sold to an unscrupulous character.

The character is a boss level caster in a radiantly assigned dungeon. Depending on which one you get the quest may be increasingly more or less difficult. Some of the dungeons, such as Boulderfall Cave and Cragwallow Slope, are extremely small while others might be rather involved or of a difficult nature. The staff should be either on the boss level caster, somewhere nearby, or in the boss level chest.

Once you have the staff, return to Enthir. He'll give you the warped soul gem, which can then be returned to Arniel to proceed with the quest.

Possible values of <Dungeon> are: 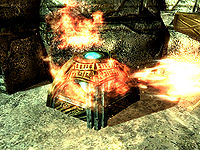 Begin this quest by asking Arniel about the progress of his project. He will say that it is going terribly. He reveals that he is trying to simulate the disappearance of the Dwemer but the warped soul gem that you acquired for him needs to be charged. Unfortunately, the apparatus he was using to charge it was destroyed in the process and he has no time to build another. Thus, he is only too happy to accept your generous offer to charge it for him.

Arniel tells you that the Dwemer used to use convectors to charge their soul gems and that some of these devices probably still exist among Dwarven ruins. He needs two more charges after his own initial charge to power the gem. Due to the nature of the warped soul gem, it will destroy the convector it is charged in. What you need to do is find a few Dwemer convectors and place the warped soul gem inside. He will teach you a spell called Arniel's Convection that must be channeled onto the Dwemer convector until the stone is charged. Keep channeling the convector until the quest updates. You will then have to find a new convector and repeat this process up to two times. There seems to be some variance on whether it takes one to three times to fully charge the stone and use of dual casting can complicate the matter.

There are six Dwemer convectors in all of Skyrim:

Two are northward of Karthwasten, one south of Ivarstead, one southwest of Shor's Stone, and two among the ruins of Mzulft. The two northwest of Karthwasten are probably the easiest to use since no enemies spawn at their locations (wild animals may be a nuisance however) and they are relatively close together. One is directly north of Karthwasten, northeast and across the river from Druadach Redoubt. It is at the base of the unmarked Dwemer pillar. If you cross the river and follow it upstream you will come to Deep Folk Crossing. Cross the bridge and the second Dwemer convector will be in front of you. The one south of Ivarstead is at the Ruins of Bthalft and has bandits. The one southwest of Shor's Stone is between there and Autumnshade Clearing and has a rogue mage. At Mzulft, one is inside the storeroom (a separate building to the right of the ruin entrance when you arrive) and the other is within the ruins proper. 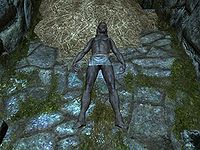 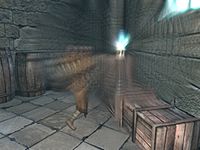 Arniel disappearing in a flash of light

Unlike previous parts of the quest, about two or three days must pass before continuing. Thereafter, talk to Arniel again. He is often to be found on the upper floor of the Hall of Attainment, but may also be in the Hall of Countenance. Once more, he's used Enthir's services, and once more, you have to pick up the pieces.

Talk to Enthir, who is almost always in his room in the Hall of Attainment. He's quite annoyed since he has no idea where the item is—or even what it is, for that matter. He was only tasked with providing transport for it from Morrowind and it simply hasn't arrived. Enthir tells you to go look for the courier somewhere in the east, and marks a location on your map.

The precise location of the courier varies. When you finally do locate him, it's immediately apparent why he didn't complete the delivery. Retrieve the blade "Keening" from his body and return it to Arniel. He is outraged that it wasn't wrapped properly and amazed that you didn't die when you touched it. By way of explanation, he relates something of the background of Keening and Sunder, the legendary tools of the Dwemer Tonal Architect Lord Kagrenac.

Arniel now conducts his experiment in an attempt to figure out how and why the Dwemer disappeared. Striking the warped soul gem with Keening, he finds that it does nothing. He strikes again, gaining no apparent result once more. Having lost his temper, he curses, lashes out a third time... and disappears in a flash of light, never to be seen again.

The quest is then unceremoniously updated as complete. Pick up Keening from the floor if you wish (although it seems to have come down in the world somewhat since the Third Era). Summon Arniel's Shade will be added to your spell list automatically.

Possible values of <Dungeon> are:

Notes
* Any text displayed in angle brackets (e.g., <Alias=LocationHold>) is dynamically set by the Radiant Quest system, and will be filled in with the appropriate word(s) when seen in game.
Retrieved from "https://en.uesp.net/w/index.php?title=Skyrim:Arniel%27s_Endeavor&oldid=2451516"