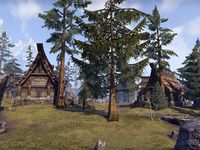 Cragwallow is an old settlement found in the wilds of Eastmarch, in the province of Skyrim. It has existed for many years, it was even the home of the powerful Icehammer Clan[1] before their demise in the late-quarter of the First Era.[2]

By the mid-Second Era, it was a mead hall populated by the royal workers of High King Jorunn, who built the roads that ran through the hold's major routes.[3] The nearby caves share the same name with the settlement.

The Icehammer Clan lived in Cragwallow as far as the early-First Era, the patriarch of the clan was named the Thane of High King Hoag Merkiller. However, the thane fell under corruption after recovering the Spear of Bitter Mercy in a hunting trip. When the Keepers of the Grove attempted to help the thane-turned lycanthrope, the thane went rabid, struck down an acolyte and escaped into the woods. The matriarch was forced to send the Cragwallow Watch, which led to a manhunt across the region. Ultimately, the thane was held up in an old tomb northeast of Cragwallow and was promptly sealed within.[1]

By 2E 582, the Icehammer Clan was defunct and Cragwallow was used as the living quarters for Jorunn the Skald-King's royal workers, who furnished the stone roads of Eastmarch. The operation had been overseen by Berj Stoneheart. After work had been completed, the workers celebrated at the Cragwallow Mead Hall with some mead and food.[3] The wayward bard, Valding arrived into Cragwallow with his magical lute in an attempt to swindle the workers. However, the music attracted the nearby Ice-Biter Tribe of Riekling from Cragwallow Cave, who slaughtered the workers and imprisoned the bard. An adventurer, caught up in the debacle defeated the rieklings, but the fate of the bard was left unknown. [4]

By 4E 201, there was no trace of the mead hall and Cragwallow caves became a home to a group of conjurers and necromancers with their atronachs inhabiting the caves and underground ruins.