Skyrim:More Than You Can Chew

Travel to Solstheim, to a small unmarked camp along the coast north of Skaal Village, not to be confused with the nearby camp of Haknir's Shoal on an islet to the northwest.

At the camp, you will find the body of a Dark Elf peddler who was apparently killed by Horkers. To start the quest, loot his body for the Peddler's Journal, which describes his interactions with a tribe of rieklings from an island to the north. The peddler was attempting to trade with the rieklings, who had mistaken his netch leather armor for food. They also made off with a book explaining how to craft netch leather armor, believing it to be a cookbook. Netch leather is of course highly toxic, which forced the peddler to begin importing regular leather from the mainland and dyeing it to fool the rieklings and prevent their untimely deaths.

After reading the book, you will need to swim northward to the riekling camp to meet with the Riekling Tribe Leader. Unlike most of their kind, the rieklings on this island are non-hostile and will allow you to approach. 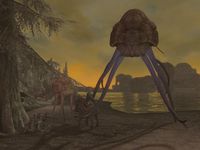 Straight from the source

The Tribe Leader is a riekling of few words. After a brief one-sided exchange, he will hand you a Riekling Hunting Party Sketch, a crude drawing which identifies the location of a hunting party sent to track down a Giant Bull Netch. At this point you will have several branching options for how to deal with the tribe.

You can attempt to Persuade the Tribe Leader that ingesting netch leather will kill him and that he should give you the crafting book. If you can't manage to convince him, your only option if you wish to save the rieklings is to use a tanning rack to create Imitation Netch Leather, by combining regular leather with charcoal and a purple mountain flower. This can then be given to the Tribe Leader to progress the quest.

Alternatively, you can track down the hunting party along the coast just east of the Sun Stone. You will arrive to find a party of rieklings engaged in battle with a family of netches (the Giant Bull Netch along with a Giant Betty Netch and a Netch Calf). Both sides are protected so it will be up to you to deliver the killing blows and decide the battle. You can kill the rieklings in order to save the netch, or you can join in and claim the Giant Bull Netch Leather for yourself. You can then deliver the leather to the Tribe Leader to progress the quest.

It is possible to obtain both the Giant Bull Netch Leather and the Imitation Netch Leather and decide which you want to give to the tribe. You can also just attack the Rieklings and and loot the Tribe Leader's corpse.

Whichever choice you make, you will be rewarded with a key which unlocks a nearby chest containing the book Crafting with Netch Leather as well as a full set of Painted Netch Leather armor. Loot the contents to complete the quest. 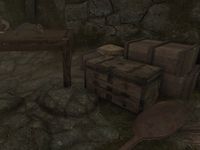 The optional chest in Fort Hraggstad

Although the quest completes once you loot the chest, you will be given a miscellaneous objective to read the crafting book. Doing so will give you two further objectives: the option to either craft your own set of Netch Leather armor, or to instead track down a shipment somewhere in Fort Hraggstad.

It is advisable to search Fort Hraggstad for a full set rather than crafting your own, as the chest is located just inside the fort's main entrance and contains an additional unique item, the Boots of Blinding Speed. This artifact is legendary for the extreme speed at which it allows the wearer to travel, although unfortunately it curses you with total blindness while equipped. This can be somewhat negated through the use of Night Eye. Once you've obtained a set of Netch Leather armor, both objectives will complete.