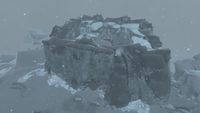 The ruins of Castle Karstaag circa 4E 201

Castle Karstaag was a massive fortress of ice, located in the northwestern region of Solstheim near the Moesring Mountains. The village of the Skaal lies to the east over the Isild River. Besides the front door, the castle may also be accessed by an underwater entrance. It used to be the home of the mythical frost giant Karstaag, as well as his Riekling servants and many Grahls. In 3E 427, Karstaag was taken from the castle by Hircine and forced to take part in his Hunt, as part of the Bloodmoon Prophecy. Karstaag was killed during the Hunt, and the castle was taken over by the Rieklings.[1]