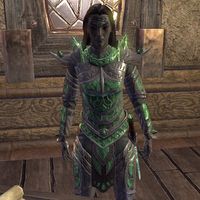 Captain Naros is the Dunmer captain of the Buoyant Armigers at Molag Mar.

If you speak to Naros, she will say:

"If you're passing through, pay attention. I'll say this once:

'Pilgrims who ignore my warning,
Vanish from the roads by morning.
Whether you're from near or far,
Best keep your arse at Molag Mar.'"
That's an unusual way to issue a warning.
"I find it best to put official notice in verse. Helps people remember, and reminds them Buoyant Armigers aren't Ordinators. Nobody wants to talk to them, even other Ordinators.
Now if I could get someone to tell me who's attacking these pilgrims."
You need someone to look into that?
"If you're offering? I suspect Ashlanders are behind the disappearances, but I don't have the numbers to chase them off.
If you can sneak into their camp near Molag Mar and find me proof of their involvement, I could finally get some reinforcements."
I'll see what I can find.

At this point the quest will begin and, needless to say, the captain will tell you the following, which will be repeated in the event she is spoken to again after your conversation with her has ended:

"Avoid killing the Ashlanders, unless they give you no choice. I don't need you starting a blood feud with my forces split. Now, I must be off to hold the heroic line, at a deeply fishy mine. Such is the life of a Buoyant Armiger."

You can ask her a number of questions at this point too:

Why do you suspect Ashlanders are responsible?

"As a rule, they don't like us. So when our people start disappearing not long after an Ashlander tribe set up camp near Molag Mal, I wager it's more than a coincidence."

What's the trouble at the mine you're headed to?

"Just a dreugh infestation. We have them contained. They're an untimely distraction, but nothing we can't handle. Once the dreugh finish mating, we'll clear them out while they're still sluggish. Shouldn't be more than a week."

"Vivec's finest: fleet and fit,
Besting heretic by sword
And Ordinator by wit.
Sworn to live a life of noble grace,
Except to laugh in danger's face.

And sometimes we kwama-wrangle groups of pilgrims. Warrior-poets are quite versatile."

Later when you meet Naros at the Dreudurai Glass Mine, you'll find her and two other Bouyant Armiger's amongst a few slain dreugh:

Captain Naros: "That looks to be the last of them … for now."

Speak to her and she will say the following upon being engaged in conversation:

"I was beginning to think the Ashlanders got you as well. Were you able to find evidence that they've been preying on the pilgrims? I can't spare a moment from these dreugh as it is."
It's not Ashlanders. A cunning dreugh is killing your pilgrims. They call it the Ruddy Man.
"Is that your idea of a sick joke? We have more sense of humor than the Ordinators, Outlander, but blasphemy is a line you best not cross. The Ruddy Man is an evil dealt with long ago, by Vivec himself. Where did you even get such an idea?"
A lone survivor. I've seen the creature and so did one of yours. <Show the Armiger helmet.>
"One of—gods! That's a smell for the ages ... so this is what became of Sydra. I hope she gave a good account of herself. Suppose I entertain this theory. What am I supposed to tell the temple? Send Lord Vivec?"
All I know is that it's hiding in this glass mine, and I'm going to kill it.
"Then understand this: whatever you find down there, it isn't the Ruddy Man. Vivec killed the Ruddy Man. There are still miners unaccounted for. Do what you can for anyone still alive down there. Vivec guide you to great glories."
Thank you.

Finish your conversation and Ibaal approaches:

Captain Naros: "What now? An Ashlander! Keep your distance! Understand?"
Ibaal: "Peace, Armigers. I must speak with the Outlander, that is all."
Captain Naros: "If you wish to hear him out, I'll permit it, but don't let your guard down."

If spoken to after this conversation, she will say, "Be careful down there. We'll keep an eye on this Ashlander."

Once you have been inside Dreudurai Glass Mine, killed the Ruddy Broodmother (as well as optionally rescuing people), speak to Naros and she will ask:

"That's it then? You've dealt with whatever was attacking our pilgrims?"
No one has anything to fear from that creature ever again.
"When I accepted your offer of assistance, I didn't expect you to be this thorough. Your bravery in descending into that dreugh infested mine alone and slaying ... whatever it was that was killing the pilgrims is commendable."
What did you think it was, if not the Ruddy Man?
"The Ruddy Man from the sermons took the act of a god to fell, so forgive me if I don't seem convinced your beast was him. No one knows where the original carapace came from. Perhaps there were other—lesser—objects cut from the same cloth."
You're suggesting this could happen again.
"Not a pleasing thought, but it's an explanation I can accept. We can only hope the world never sees the like of the true Ruddy Man again. It's gone for now, and we've avoided a feud with the Ashlanders, so let's try to look on the bright side."

Speak to her again after this, and she'll tell you:

"Once things settle down, I'll pen a ballad in your honor, Outlander. You have my word it'll stink less than this place when we're done."