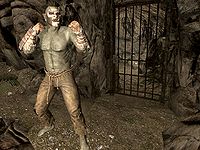 You will arrive in Cidhna Mine after completing the quest The Forsworn Conspiracy and choosing to go to jail, where Urzoga gra-Shugurz tells you that you will have to mine for your freedom. Your journal will inform you that you must find Madanach, also known as the King in Rags, to help clear your name. Head through the gate, walk down the wooden platform, and talk to miner Uraccen who is sitting by the fire.

Uraccen will say that you won't be able to speak with Madanach unless you can get past his bodyguard Borkul the Beast. Uraccen can entertain you with a story of one of Borkul's exploits before you go speak with him. Borkul is guarding one of the three gates in this room. When you ask him to see Madanach, he tells you that the toll for entry is a shiv. As alternatives to his request, you can brawl with him, intimidate or persuade him, or pickpocket the key from him.

To get a shiv, talk to Grisvar the Unlucky, who will ask for a bottle of skooma. To get the skooma, you have to find Duach and pass a speech challenge, win a brawl, or pickpocket him.

Bring the skooma to Grisvar, who will give you the shiv. If you want to keep the shiv, then you can still attempt the alternatives to completing Borkul's request. You can pickpocket an additional bottle of skooma from Duach and bribe Borkul with it. Alternately, you can also start a battle with the Forsworn prisoners (attack anyone but Grisvar). This locks you into killing Madanach, as he becomes hostile. This fight can be difficult; you have no armor, no enchantments, and your only non-conjured weapons are pickaxes and possibly shivs, though you can still use any magic or powers that you may possess. Once you've won, loot the key off Borkul's body and proceed to kill Madanach per the next section. 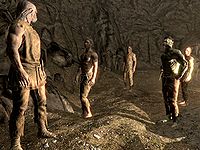 Once you get past the Orc, you will see Madanach sitting at a desk. He will direct some disparaging remarks at you regarding your predicament, and ask you what you want. Here, you can take one of two paths: take your revenge, or find your answers. If you seek revenge, you can kill Madanach here (or at any time) and then escape on your own. If you want a fair fight, you can tell him you plan to kill him; otherwise, just attack him. Attacking him will make all of the other prisoners hostile (except Grisvar), but as long as they are out of range, they will not rush in to join the fight. Search Madanach's body for a key and a note, then unlock the gate and exit the prison.

If you seek answers instead, Madanach will direct you to Braig, another prisoner, to hear his story of injustice. After you have convinced Braig to tell his story, return to Madanach. You will see a different side of Madanach, and the horrors that drive his purpose. He tells you he wants to return to the war and will help you escape as well, but only if you prove your loyalty to him by killing Grisvar the Unlucky. If you gave your shiv to Borkul, you can get a new one from Madanach at this point. Find Grisvar and kill him. If you tell him that, "Madanach says hello", Grisvar will eventually become hostile and the other inmates will attack him. Once he's dead, return to Madanach, who will declare you an honorary member of the Forsworn and lead the prisoners to the escape tunnel. 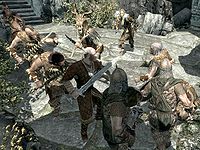 After a short speech, follow Madanach and the Forsworn through the tunnel to Markarth Ruins. You will encounter a pair of frostbite spiders, then one or two Dwarven Spheres as you make your way through the ruins. If you're on your own, you can sneak off the bridge onto the floor below, as fighting alone will be quite difficult without any of your normal equipment. Once past the automatons, continue through the ruins until you reach a short tunnel that leads to a door to Markarth. Thonar will return your equipment and give you the Silver-Blood Family Ring if you are on your own and have killed Madanach when you exit the gates.

If you sided with Madanach, a Forsworn woman named Kaie will be there to return your confiscated goods and give you the Armor, Boots, Gauntlets, and Helmet of the Old Gods. The Forsworn will all equip their own armor and run out. When you follow them through the door, you will emerge into a skirmish between the Forsworn and Thonar Silver-Blood, accompanied by a Markarth City guard. After a short conversation, Madanach and the Forsworn will attack and kill Thonar, then fight their way through the rest of the city guard to the gates. Note that some of the townsfolk may be hostile to the Forsworn and can be killed during the breakout. To avoid collateral damage, wait in the tunnel until midnight before exiting out to the city, then no one except for the guards will be present.

Outside the city walls, Madanach and any remaining Forsworn will then run to Druadach Redoubt where they will take up permanent residence. Madanach's Forsworn at Druadach Redoubt will remain friendly to you if you sided with him. No matter which approach you used, you will be pardoned.

It is possible to obtain both the Armor of the Old Gods and the Silver-Blood Family Ring, but it might prove difficult for lower-leveled players to survive, as well as keeping Thonar alive:

Townsfolk will speak of how you escaped with the Forsworn and act as if Madanach escaped, however.

If you finish the quest this way, Borkul the Beast will not be hostile with the rest of the Forsworn, and attacking him will incur a bounty. After talking to Thonar, he will be kneeling as if bleeding out.

Another possible way to obtain both the Armor of the Old Gods and the Silver-Blood Family Ring is to:

Note: This method may lead to the bug described below (Thonar not appearing) and is not recommended.

Notes
* Any text displayed in angle brackets (e.g., <Alias=LocationHold>) is dynamically set by the Radiant Quest system, and will be filled in with the appropriate word(s) when seen in game.
Retrieved from "https://en.uesp.net/w/index.php?title=Skyrim:No_One_Escapes_Cidhna_Mine&oldid=2683849"