The Elder Scrolls V: Skyrim VR is a virtual reality version of Skyrim Special Edition designed for use with virtual reality headsets. It initially launched on PlayStation VR on 17 November 2017 and later came to PC via SteamVR on 3 April 2018 with support for Oculus Rift, HTC Vive, and Windows Mixed Reality. Similar to the normal Special Edition, Skyrim VR includes all three DLCs. 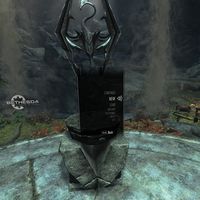 The Main Menu in the Playroom

The Playroom is the main menu for Skyrim VR. It is a playable space that you can explore, complete with an archery range to practice the new ranged combat. To return to the main menu, simply return to the large Skyrim logo in the center of the playroom.

When first launching Skyrim VR, you will be walked through a tutorial to help set up your VR controller and comfort options. You spawn at the bottom of the small cave, in front of some Dwemer ruins. You are given the option to choose your dominant hand. This determines many things like what sticks control your movement, and what hands your weapons are placed in. By default, teleportation movement is enabled. You are tasked with teleporting over to the Steed Stone in front of you. Once you reach the stone, you can choose between teleportation or direct movement. Your next objective is to cross a small bridge next to a waterfall to reach the Thief Stone. Once there, you can choose your preferred turning style between snap turning and smooth turning. From here, you are free to make your way to the main area in the center of the cave. Heading directly to the Skyrim logo on the pedestal in the middle of the room will bring up the main menu where you can start your game. Alternatively, you are free to be distracted by the archery range on your right, next to some Nordic ruins. On a table, you will find a bow with infinite arrows and an archery range with three target dummies at various distances. Picking up the bow triggers a message box that teaches you how to use the bow in VR. It is recommended to practice your aim if you are new to virtual reality.