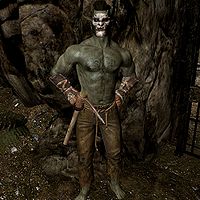 Borkul the Beast is an Orc warrior who is found inside Cidhna Mine. He is considered to be the toughest prisoner in the mine and guards the door leading to Forsworn leader Madanach. During No One Escapes Cidhna Mine, you need to convince him to let you pass in order to gain your freedom.

Once outside the city, he will run all the way to Druadach Redoubt where he will start his life anew as part of the Forsworn. He will now spend his time either patrolling the path by the river, or wandering around inside the cave, occasionally eating, relaxing, or sleeping. His only dialogue at this point will be about him naming you as Blood-Kin to the Orcs.

He is only armed with a pickaxe and wears ragged trousers and a pair of iron gauntlets.

When first encountered, he will not leave his spot near the door, though he is quite talkative. When you approach him he will say:

"The new meat. So soft. Tender. What was it like killing your first one, huh?"

You will then get the option to ask him a couple of simple questions:

What are you in for?
"Murder. Banditry. Assault. Theft. And lollygagging."
How long have you been here?
"Guards brought me in about 12 years ago. Was running a good group of bandits up until then. But these Forsworn. They're nothing like the men I cobbled together. They're real killers."

This conversation will also unlock some new greeting when he sees you:

"You serve your time by digging. So dig."
"Prison's not so bad. Less complaints when I kill people."

There will be no further dialogue options until you have spoken to fellow prisoner Uraccen about Madanach.

When you return to Borkul you can ask him to see Madanach:

I need to see Madanach.
"You want to talk to the King in Rags? Fine. But first you got to pay the toll. How about you get me a shiv? Not that I need one, but it's nice to have in case I need to do some "shaving." Ha ha."

NOTE: Please see the related quest page or the shiv page for information on how to get the dialogue.

After he lets you in, he will wait by the door until you prove your loyalty to the King in Rags. When you follow Madanach out to the main chamber, Borkul will stand in the crowd and listen to the speech and shout:

"The Reach belongs to the Forsworn!"

He will then run through the secret tunnel with the rest of the Forsworn and enter Markarth Ruins, saying nothing except:

Once outside, he will don a full set of Forsworn Armor and fight for his freedom like everyone else, battling his way through the city towards the gates.