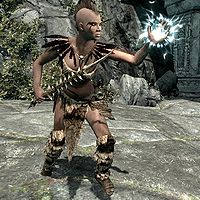 Kaie, fighting her way out of Markarth

Kaie, a Breton nightblade, is a member of the Forsworn who meets with Madanach and the Cidhna Mine escapees and gives them their equipment just before leaving the Markarth Ruins. She will follow Madanach, fight alongside the Forsworn, and run all the way to Druadach Redoubt where she will settle down.

When she meets you at the gate to Markarth, she will have a brief conversation with Madanach, saying: "Madanach. I've brought what you asked for." to which Madanach will respond: "Good work. Get ready while I have a word with our favorite outsider." Madanach then turns to you: "I had Kaie recover all the things the Nords stole from you. You better get ready before we break out into the city. And take this. It's blessed with the old magicks. Something to remember me by." When Kaie hands the escapees their equipment, she may say: "It wasn't easy getting all your things. A few guards had to have their throats slit." During the escape, she will shout, "For the Forsworn!"