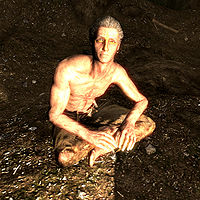 Uraccen is a Breton witchblade held prisoner in Cidhna Mine. He has been sentenced to life in prison for being a member of the Forsworn. He is the father of Uaile, an undercover Forsworn agent.

He is the first prisoner that you can talk to when you arrive. He will greet you with:

You can choose between three possible replies, the second of which is based on your current bounty:

Regardless of your response, he will then go on with:

"My advice? Serve your time at the pickaxe and get out. You don't want to end up getting a shiv in the guts over a bottle of Skooma."

Skooma? What's that?
"Bottles of Moon Sugar. Khajiit use it as a... pick me up. Good way to pass the time. Prisoners smuggle the stuff in. Only currency we have down here."

A shiv?
"Small blade. Easy to hide. I mean, sure, you could just swing a pickaxe into someone's face, but people tend to see that coming. Got a problem with a prisoner? Get a shiv. Hear Grisvar has a spare, if you could get him to part with it."

Where are the guards?
"They come in here once a week to clean out the bodies, grab any ore we've mined, and beat down the troublemakers. That's the only time when we get food, too. And if there's not enough ore mined up, we don't get any."

What are you in for?
"A Nord nobleman I served was stabbed in the night. Wasn't me, but I knew I'd be blamed. So I ran. Joined the Forsworn. Started killing. Got caught. Now I'm here."

After this his greetings can be:

"I left behind my daughter Uaile when I was taken."
"How old is my daughter now, I wonder? In prison, you lose track of time."
"I'm just another Forsworn sent to rot here in this mine."

Where's Madanach?
"If you're asking, that means you're the new lifer. Tough luck, friend. Those guards sold you out but good. No one talks to Madanach, I'm afraid. Not without getting past Borkul the Beast... And you don't want to talk to Borkul the Beast."
Borkul the Beast?
"Madanach's guard. Big, even for an Orc. Heard he ripped a man's arm off and beat him to death with it. He's old-fashioned like that."

If you decided to escape with Madanach, Uraccen cannot be talked to and will only say:

"No turning back now."