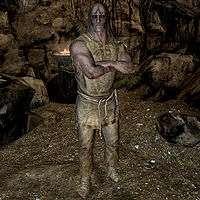 Braig is a Breton witchblade, held prisoner in Cidhna Mine. He has been imprisoned longer than anyone else in the mine with the exception of Madanach.

He wears a roughspun tunic and footwraps, and carries a bottle of skooma and a shiv. He knows the Alteration spell Oakflesh, the Conjuration spell Raise Zombie, and the Destruction spell Flames.

During the day, he can be found mining in various areas of Cidhna Mine, going to sleep at 10pm and waking at 4am the next morning.

Once you tell him that Madanach has sent you he will be more open:

Madanach asked me to hear your story.
"My story, huh? Everyone in Cidhna Mine has a tale. Let's hear yours first. When was the first time you felt chains around your wrists?"

You can then reply in three ways:

"Do you have any family? Anyone waiting for you on the outside?"
Yes, but they're far from Skyrim./I have friends. Only family I need./None that I care to talk about.
"I had a daughter, once. She'd be 23 this year. Married to some hot-headed silver worker or maybe on her own learning the herb trade. The Nords didn't care who was and who wasn't involved in the Forsworn Uprising. I had spoken to Madanach once, that was enough. But my little Aethra didn't want to see her papa leave her. She pleaded to the Jarl to take her instead. And after they made me watch as her head rolled off the block, they threw me in here anyway, to dig up their silver."

You think your story justifies the murders the Forsworn committed?
"I'm not Madanach. I was never a leader of the Forsworn. The only anger I can justify is my own. But every family in the Reach has a story like mine. There are no innocent onlookers in this struggle. Just the guilty, and the dead."

I'm sorry to hear what happened to you.
"My daughter is the one who needs your pity. I'm just a poor Forsworn whose only regret is not killing more Nords before I was locked up."

"What do you want? Have digging to do."
"Don't reach for a shiv around me, or we'll both regret it."

If you try to talk to him before starting the quest it becomes clear that he doesn't want to talk:

How long have you been here?
"Long enough."

What are you in for?
"Don't want to talk about it."