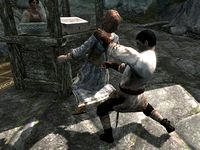 Glory to the Forsworn!

While walking through the open market in Markarth, a woman named Margret is viciously attacked while buying jewelry. Her attacker, a Breton witchblade named Weylin, will shout a rallying: "The Reach belongs to the Forsworn!" as he attempts to escape. If you do not step in, the guards will kill Weylin, who defiantly exclaims, "I die for my people." In the ensuing confusion, the guards are curt as they try to quell the small crowd that has gathered. If you ask about the crime and the Forsworn, they tell you that the Forsworn are nothing but a bunch of madmen, and to mind your own business.

If you search Margret's body, take the key to her room for use later in the quest, although you will be able to acquire it later on from the Silver-Blood Inn innkeeper. It is possible to save Margret from Weylin if you're fast enough. If you do save her, she rewards you with the pendant she just purchased. (Preventing the murder will affect the course of the quest; see notes below.)

Shortly after the scene in the marketplace, a Breton citizen named Eltrys will approach you and ask if you saw what happened. You can chat with him for a bit about the assault, but then he will suddenly say, "Oh, I think you dropped this. Some kind of note. Looks important." If you question him about the note, he feigns innocence. The note tells you to meet him at the Shrine of Talos. You can ask him how to find the shrine, and while he is still elusive, he will say: "Huh. Not sure. I don't worship Talos, myself. I think I heard someone mention it was underneath the Temple of Dibella, in the big crag in the center of the city."

Travel to the shrine underneath the Temple of Dibella. To get there, climb the stairs at the north corner of the marketplace, follow the bridge to the left, then take the path to the left and you should see the door. Descend into the temple and speak to Eltrys, who has been looking for answers about the Forsworn attacks that have been happening in the city, ever since his father was killed by the Forsworn and that he has been trying his whole life to find out why, and why the guards do nothing about it. He pleads for your help; find out why Weylin attacked Margret and who is behind all of this. He will pay you for any information you can bring.

To find information on Margret, go to the Silver-Blood Inn and ask Kleppr or Frabbi about her. She apparently rented the nicest room in the inn, which is down the hall to the left of the entrance. If you did not obtain the key to Margret's room from her corpse earlier, you can receive it through dialogue with Kleppr, steal it from behind the bar (or even just simply take it freely), or just pick the lock to her door. Searching the end table in her room will yield Margret's journal. After reading her journal, you learn that she probably wasn't just a casual jewelry shopper, and that she has been gathering information about Thonar Silver-Blood.

If Margret is alive, she will be sitting by the fire at the inn or standing out in the marketplace. You can persuade her to divulge her real purpose in Markarth. Apparently, Margret is an Imperial spy working with General Tullius to investigate the Treasury House and the Silver-Blood family. She was hoping to procure the deed to Cidhna Mine for the Imperials. She is also sure that Thonar Silver-Blood arranged for her murder. After leaving the inn with your information about Margret, a Markarth City guard will try to warn you off your investigations.

You can report back to Eltrys with your information about Margret for a leveled gold reward, or continue researching Weylin and Thonar before going back to Eltrys.

In your investigations thus far, you have learned that Weylin worked as a smelter at Cidhna Mine and lived in the Warrens—a public house for the city's destitute. You can follow the smelter lead to the Smelter Overseer's House to speak with Mulush gro-Shugurz. However, he is reluctant to talk to you, giving you a Speech challenge, which actually results in very little information. You will find out that you need to go to the Warrens and speak with Garvey. A more direct route will be to speak with Garvey, a resident of the Warrens and the keeper of the keys. Ask him about Weylin and tell him you need the key to Weylin's room. He will only give you the key if you pass a Speech challenge to persuade, intimidate, or bribe him.

If you do not receive the key, you can pick the lock on the door or pickpocket the key from Garvey. Weylin's room is to the rear of the Warrens, on the right-hand side. Enter it and look in the chest for a note addressed to Weylin. Read the note to learn that Weylin truly was not acting alone, and that some anonymous puppet-master named only "N" was directing Weylin's actions. You will now gain the objective "Find out who N is".

When you exit the Warrens, a Breton named Dryston will approach you, threatening: "You've been digging around where you don't belong. It's time you learned a lesson." You have some dialogue options, but it will come down to Dryston taking a swing at you and a brawl ensuing. If you attack Dryston with anything but your fists (i.e., weapons or magic), you will receive a bounty and any guards that witness the fight will attack you. Once you defeat Dryston, he will tell you, "I was sent by Nepos the Nose. The old man hands out the orders. He told me to make sure you didn't get in the way. That's all I know, I swear!" This is all Dryston knows, and any attempts at further questions will just be answered with, "Nepos is in charge. That's all I know." Dryston also carries a note confirming it was Nepos that directed him to "rough you up". You are now directed to find out about Nepos the Nose. You can report back to Eltrys with what you have discovered about Nepos for a leveled gold reward. Eltrys will be quite surprised that Nepos may be involved, but concedes that he may be getting orders from elsewhere. From here, continue on with your investigation into Thonar. 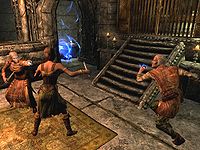 Following Eltrys' suspicions that Thonar and the Treasury House are involved in this conspiracy should be your next stop. When you enter the venerable financial institution, Rhiada will be at the front desk. You can ask to see Thonar, which prompts a Speech challenge, or you can just pick the lock on the door to the left of the front desk, bypassing Rhiada altogether.

When you enter Thonar's room he doesn't seem alarmed to see you and you may speak to him about Margret, the Forsworn, or the guards that are harassing you. Suddenly, there is a disturbance—Thonar will call out to his wife, Betrid, who has fallen victim to Nana Ildene and Donnel, the supposed cleaning crew for the Treasury House. Kill Nana Ildene and Donnel, and then express your sympathies to Thonar. He will curse the Forsworn, and then tell you that he has been controlling them by imprisoning their king Madanach. Madanach has now become "out of control", however. The attack on Betrid can be avoided by pickpocketing Thonar's journal without speaking to him.

When you enter Nepos's house his housekeeper, Uaile, will step in to keep you from seeing Nepos. However, she is overruled by Nepos, and he invites you in for a chat. Your dialogue choices all end with Nepos admitting that he is indeed Forsworn. When questioned further he will reveal a strong loyalty to "the King in Rags", Madanach, from whom he gets his orders. He will give you some history on Madanach's position and political views. Nepos is actually quite verbose in the matter of Madanach, which should by now be making you suspicious. As suspected, Nepos will then inform you that Uaile is actually a Forsworn agent and you won't be getting out of the house alive. Everyone in the household draws their weapons, including Nepos. After the battle, you can find Nepos' journal where he pours out his remorse for his actions. You can also try to pickpocket Nepos's journal to gather the evidence secretly and avoid the fight. Lingering too long after the theft here will result in everyone becoming hostile.

Do the Time Without Doing the CrimeEdit 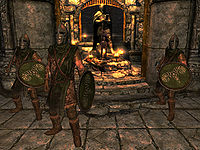 It's off to Cidhna Mine for you.

Return to the shrine of Talos to report back your findings. However, when you arrive Eltrys has been slain by a group of guards, who are now lying in wait for you. "We warned you, but you just had to go and cause trouble. Now we have to pin all these recent murders on you. Silence witnesses. Work. Work. Work."

Player: "What did you do to Eltrys?"
Guard: "Same thing we do with all the other natives who want to change things around here. We had a nice little deal going between Thonar and Madanach until you and Eltrys started snooping around. Well, you wanted to find the man responsible for those killings? You'll have plenty of time with the King in Rags when you're in Cidhna mine [sic]."

Player: "You're corrupt. Thonar is paying you."
Guard: "We have a nice arrangement in this city, and we're not letting you get in the way. You have a problem with that? Take it up with Madanach. I'm sure the King in rags and his Forsworn would love to meet you. Now you're coming with us. It's a life sentence in Cidhna Mine for you."

Player: "Madanach is behind these killings!"
Guard: "You think you're the only one who knows that? We had a nice little deal going between Thonar and Madanach until you showed up. You'll have plenty of time to take it up with the King in Rags while you're serving a life sentence in Cidhna Mine."

The guards there will now attempt to arrest you. You can try to resist arrest or talk your way out of it; however, you must submit to being jailed in order to advance the quest to No One Escapes Cidhna Mine. Otherwise...

If you resist arrest, several waves of guards will attack you within the shrine. If you end this combat (either by killing all guards or otherwise), any Markarth City Guard who sees you afterward will attempt to arrest you on sight for "murder and conspiracy against the city of Markarth". When you are arrested with this dialogue, you may be presented with several normally-available choices for escaping arrest (i.e. Thane status, Thieves Guild, bribery), but any choice other than going to jail or resisting arrest is rendered useless. The guards will reject any and all attempts to exonerate the Dragonborn whatever the player tells them. They will then attempt to apprehend the Dragonborn on sight. This is a gameplay script exclusive to this mission. Going to jail will still begin No One Escapes Cidhna Mine. This arrest-on-sight status will persist permanently in Markarth until you submit to going to jail.