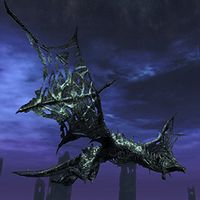 Durnehviir is a dragon that inhabits the Soul Cairn. You can learn one word of the Soul Tear shout from him each time that you summon him with his shout. He cannot be truly killed, as he will reconstitute himself in the Soul Cairn upon being sufficiently injured. His name is formed from the dragon words Dur Neh Viir ("Curse Never Dying"), and can be roughly translated as "Cursed with Undeath".

Durnehviir took part in many battles against other dragons for control of the skies. The others perished in battle, while he sought other means to become dominant and delved into necromancy. He made a deal with the Ideal Masters, promising that he would guard Valerica until her death in exchange for the power to summon very powerful undead armies. The Ideal Masters, however, neglected to tell him that she was immortal, and so he was forced to serve them for all time.

You will encounter Durnehviir in the Soul Cairn while attempting to rescue Valerica along with Serana. Upon his defeat, he recognizes your strength and names you "Qahnaarin" or "Vanquisher". He then asks you to summon him in Tamriel. His body has been in the Soul Cairn so long that he can never truly leave it without dying, but summoning him to Tamriel will increase his strength so that he can temporarily leave to aid you in battle.

Valerica will first warn you of Durnehviir after instructing you to kill the Boneyard Keepers:

"One more word of warning. There's a dragon that calls itself Durnehviir roaming the Cairn. Be wary of him.
The Ideal Masters have charged him with overseeing the Keepers, and will undoubtedly intervene if you're perceived as a threat."

Alternatively, if you've already killed the Keepers, she will say:

"One more word of warning. There's a dragon that calls itself Durnehviir roaming the Cairn.
The Ideal Masters have charged him with overseeing the Keepers, and will undoubtedly investigate the fact that the barrier has fallen."

Once you've killed all three Keepers she will tell you:

"Keep watch for Durnehviir. With the prison's barrier down, he's almost certain to investigate."

While leading you to the Elder Scroll, Valerica will warn you again:

"Follow me and stay close. Keep your eyes open for Durnehviir."

When Durnehviir finally attacks, she will exclaim:

"It's Durnehviir... he's here! Defend yourselves!"

She will admonish you if you try to talk to her during the battle with Durnehviir:

"Idiot! I can't get to the scroll with Durnehviir attacking us!"

Valerica will be surprised when Durnehviir is defeated but will quickly realize he may not be gone for good:

"Forgive my astonishment, but I never thought I'd witness the death of that dragon.
Volumes written on Durnehviir allege that he can't be slain by normal means. It appears they were mistaken. Unless...
The soul of a dragon is as resilient as its owner's scaly hide. It's possible that your killing blow has merely displaced Durnehviir's physical form while he reconstitutes himself."

When asked how long it will take for Durnehviir to return, she will say:

"Minutes? Hours? Years? I can't even begin to guess. I suggest we don't wait around to find out."

True to Valerica's word, Durnehviir will rematerialize outside when you exit the Boneyard.

Instead of fighting you, however, Durnehviir will express his admiration of your combat prowess and ask a favor of you:

"Stay your weapons. I would speak with you, Qahnaarin."
I thought you were dead.
"Cursed, not dead. Doomed to exist in this form for eternity. Trapped between laas and dinok, between life and death."

You will then have three options:

Why are we speaking?
"I believe in civility among seasoned warriors, and I find your ear worthy of my words."
Didn't you try to kill me?
"The hostility was necessary. I was bound to an oath." (Go back to branching point)
I have more pressing matters at the moment.
"Forgive me, Qahnaarin. We will continue this when time releases you from its relentless grasp." (Exit dialogue)

If you choose the first option, or speak to Durnehviir again after choosing the third option, Durnehviir will continue:

"My claws have rended the flesh of innumerable foes, but I have never once been felled on the field of battle.
I therefore honor-name you "Qahnaarin," or Vanquisher in your tongue."
I found you equally worthy.
"Your words do me great honor.
My desire to speak with you was born from the result of our battle, Qahnaarin. I merely wish to respectfully ask a favor of you."
What kind of a favor?
"For countless years I've roamed the Soul Cairn, in unintended service to the Ideal Masters.
Before this, I roamed the skies above Tamriel. I desire to return there."
What's stopping you?
"I fear that my time here has taken its toll upon me. I share a bond with this dreaded place.
If I ventured far from the Soul Cairn, my strength would begin to wane until I was no more."
How could I help?
"I will place my name with you and grant you the right to call my name from Tamriel.
Do me this simple honor and I will fight at your side as your Grah-Zeymahzin, your Ally, and teach you my Thu'um."
Just call your name in Tamriel? That's it?
"Trivial in your mind, perhaps. For me, it would mean a great deal.
I don't require an answer, Qahnaarin. Simply speak my name to the heavens when you feel the time is right."

You will then learn all three words of power for the Summon Durnehviir shout, after which you will have the opportunity to ask Durnehviir several questions:

How did you end up in the Soul Cairn?
"There was a time when I called Tamriel my home, but those days have long since passed.
The dovah roamed the skies, vying for their small slices of territory that resulted in immense and ultimately fatal battles."

Were you a part of all that?
"I was. But unlike some of my brethren, I sought solutions outside the norm in order to maintain my superiority.
I began to explore what the dovah call "Alok-Dilon," the ancient forbidden art that you call necromancy."

So you sought the Soul Cairn for answers.
"The Ideal Masters assured me that my powers would be unmatched, that I could raise legions of the undead.
In return, I was to serve them as a Keeper until the death of the one who calls herself Valerica."

They didn't tell you she was immortal.
"I discovered too late that the Ideal Masters favor deception over honor and had no intention of releasing me from my binding.
They had control of my mind, but fortunately they couldn't possess my soul."

Is that why you're free now?
"Free? No. I have been here too long, Qahnaarin.
The Soul Cairn has become a part of what I am. I can never fully call Tamriel my home again, or I would surely perish.
I only hope that you will allow me the precious moments of time there through your call."

Why do you call me "Qahnaarin?"
"In my language, the Qahnaarin is the Vanquisher, the one who has bested a fellow dovah in battle."

Fellow dovah? I am not a dragon.

Durnehviir's response will differ depending on your progress in the main questline:

After speaking to him, Durnehviir can be found atop a dilapidated, non-functional word wall to the left of the Boneyard entrance. He will only say, "Speak, if you have aught to say worth the listening."

You will need to unlock the Summon Durnehviir shout before you can use it. The first three times you summon Durnehviir, he will teach you a word of the Soul Tear shout.

Summoning Durnehviir on subsequent occasions will have him say one of the following lines:

"I rejoice in my freedom, if only for a moment."
"The skies of Keizaal are mine again!"
"You give me freedom from the enslavement of the Ideal Masters. Thank you."