Leave the Hall of Valor and cross the Whalebone Bridge to the edge of the Shadowed Vale, where your Nord brethren are gathered. They are as eager to slay Alduin as you are. When the three heroes have assembled you will take your place by their sides. Once you have done so, one of them will suggest that you all use the Clear Skies Shout together to blow away the mist. Your companions will wait for you to Shout then use their Thu'um as well. You need to do this three times when requested, as Alduin recovers the field in mist the first two times you clear it away. After your third Shout, the mist dissipates, Alduin becomes enraged and flies towards you and the final battle is joined. 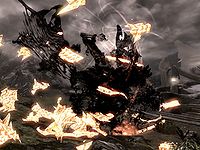 The death of the World-Eater

This is when you begin your last fight with Alduin. Alduin launches a barrage of fire attacks at you, the Nords, and any lost souls that have been freed from their permanent fog. Alduin's rain of fire ability hits a large area of effect so have wards, healing spells and/or potions ready.

To defeat Alduin, you must once again strike him with Dragonrend to force him to land. Until you do, he is invincible and will take no damage. While on the ground, it is relatively easy to kill him due to the fact that the three Nord heroes will help in the battle. Alduin is basically the same as every other dragon the Dragonborn has thus far encountered: melee from the sides to avoid the potent tail attack, have a shield handy if you're planning to go head-to-head. For archers, Alduin is just as susceptible to potent poisons as other living creatures. Hit from a distance with high-damage lingering poisons and he will stay down fairly quickly. For magic users, the Marked for Death Shout is very useful as it increases his susceptibility to damage from spells. Don't stand in front of him, as his fire breath is deadly even to high level players. Resist Fire and Resist Magic may help against this.

After you strike the killing blow, Alduin writhes in agony and his soul begins to vanish. Alduin thrashes on the ground as his soul leaves his corporeal form. As his essence drains away, a black tar-like skeleton is revealed underneath. His form continues to corrode, fading into wisps and with a final, thunderous spasm, Alduin is torn apart; not even his skeleton remains in this afterlife. 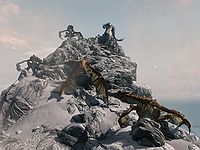 Dragon reception at the Throat of the World

As the mist of Alduin's soul snare dissipates and the sky clears, Tsun congratulates you on your mighty deed, as do your three helpers and all the characters lost in the mist, who will make their way to the bridge. Before leaving Sovngarde, Tsun teaches you the Call of Valor Shout, which allows you to summon a hero from Sovngarde to fight by your side. You will not be able to reenter the Hall of Valor, so when you are ready to leave, talk to Tsun and he will Shout you back to Tamriel.

Upon returning to Tamriel, you will be returned to the Throat of the World and greeted by a large number of dragons perched there. They recite a chant together acknowledging the Dovahkiin and the destruction of Alduin the World-Eater, departing one by one as they do:

If you did not already kill Paarthurnax, he will have a final conversation with you, and expresses hope to convince other dragons to join the Way of the Voice before flying off himself. Afterwards, if you are still on the mountaintop, Odahviing will come to admit his allegiance to you so that you may freely use his Thu'um to call him, though he warns that not all dragons are willing to follow Paarthurnax's example.

Returning to High Hrothgar or Sky Haven Temple will yield further closing dialogue with Arngeir or Esbern, respectively. This is easy to miss because the game relies on you to think of returning to the "wise old man".

Congratulations! You have completed Skyrim's Main Quest, and may now continue your adventures.