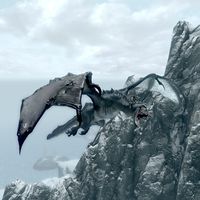 Dragon riding is a new gameplay mechanic added by the Dragonborn add-on. In order to ride a dragon, you must acquire all three words of the Bend Will shout and use it on a dragon. The dragon will then land and allow you to climb onto its back and ride it. You cannot directly control the dragon while riding, but can give it certain instructions. Unlocking the third word of the Bend Will shout starts the final quest of the Dragonborn main questline, in which you're likely to ride your first dragon. After you do this, a help section will be added in the menu for dragon riding.

You can lock on to a single enemy which causes the dragon to attack that target. The dragon will then use a standard aerial attack pattern and can be assisted by you via shouts and spells. Area of effect spells or summons cannot be used while riding a dragon. The use of weapons (such as bows and melee weapons) are mostly limited as well.

To fast travel to different areas, simply select the location on your map as you normally would. In terms of in-game time, fast traveling on a dragon is almost immediate. Once given the command to land, the dragon will return to ground level where you can dismount. The dragon will then either aid you in combat, attack you, or simply leave. You cannot fast travel on a dragon to a different worldspace. This means you cannot travel to and from walled cities, or between Solstheim and Skyrim.

It's impossible to directly control the dragon while riding, but they will follow the following commands:

During combat, you are allowed to give your dragon commands. If you have given it an attack command and locked onto a target, it will attack the target until its attack has successfully hit the target or until the dragon is called off. It might take some time for the dragon to actually kill the target, as it will continuously circle until it is in the correct position to attack. If the target moves too fast or finds cover, the dragon may be unable to attack; in this case, it will fall back and continue to circle until the target is vulnerable. If there are several enemies around, the dragon will first dispatch its primary target, then select another automatically.

If the dragon you're riding takes too much damage during combat, it can be killed; if this happens, you will plummet to the earth and most likely die. Should your dragon be struck by the Unrelenting Force‎ shout, you may get knocked off, which will probably also result in your death.

While riding a dragon, you can only use certain spells and shouts. You are limited mainly to Destruction, Restoration, and Alteration spells while mounted. When casting, you need to pay attention to the effective range of your spells and other factors such as the landscape. The dragon has a fast movement speed, so you must remember that it may be hard to actually hit the enemies.

The following is a list of spells and dragon shouts which may be cast from the back of a dragon:

When mounted, dragons will give various responses to your commands.

One achievement is related to dragon riding: