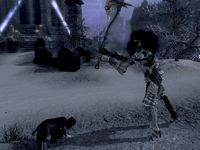 Upon your arrival in the Soul Cairn, follow your quest marker to the Boneyard and find Serana's mother Valerica standing near the entrance. While you are able to speak with her, she cannot be reached due to an invisible barrier. During the course of interacting with her, she will reveal that the barrier can only be removed by defeating the three Boneyard Keepers.

The Keepers each live in separate towers, apart from the main Boneyard. The quest markers will lead to all three.

The locations of the Keepers are relatively far apart. Because of this it is recommended that you have some means of quick transportation. Arvak will do nicely for this purpose.

Each of the Keepers have 1-4 minions (bonemen, mistmen or wrathmen) that will attack you, usually ahead of your encounter with the Keeper. The Keepers themselves may prove to be quite a challenge to lower level players. One possible strategy for the bow-wielding Keeper is to use Unrelenting Force to blast it off the edge of the tower.

Once the final Keeper is defeated, the quest will update and you will need to return to Valerica. She will then lead you into the Boneyard. Once inside the Boneyard, you will have to "slay" Durnehviir. There will also be numerous bonemen in combat, but they will die along with him. Let Valerica and Serana handle any of the minions while you focus on Durnehviir. Once he has been defeated, take the Elder Scroll, and speak to Valerica. If you are not a vampire, and allowed Serana to partially soul trap you in order to enter the Soul Cairn, Valerica will instruct you on how to retrieve your soul from a Soul Essence Gem located at an offering altar not far away. The miscellaneous objective "Retrieve the Soul Essence Gem" will lead you to it.

Once you leave the Boneyard, Durnehviir will rematerialize and speak to you, starting his quest. If you tell him you have more pressing matters to attend to, his quest will not begin and you will need to return to him at a later time to initiate it. Afterwards, you may proceed to the offering altar to retrieve your soul if necessary, then travel back to the portal and complete the quest.