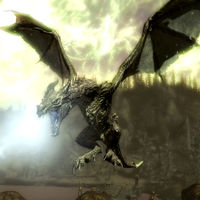 Krosulhah is a unique frost dragon found outside Nchardak during The Gardener of Men.

His name means "Sorcerer Day Mind" in the dragon language.

Unlike other dragons (with the exception of the Skeletal Dragon), Krosulhah will not yield dragon heartscales when struck with Kahvozein's Fang.

When encountered, he hovers above the ruins and bellows before attacking you and Neloth.

"Miraak has commanded your death. So it shall be."

He will taunt you during the battle:

"When Miraak returns, all will bow before him"

"Soon, Miraak will return to resume his rightful junaar over Solstheim!"

He shares several lines of dialogue with Sahrotaar, as they are both in the faction "Combat dialogue for dragons allied to Miraak":

"My thuri Miraak is the only true Dovahkiin."

"Krin mey. You are a fool to challenge Miraak. His thu'um is supreme."

"Your death has been foretold."

"Aam uv dir. Those that will not serve Miraak must die."

If you use Dragonrend on Krosulhah, he will comment on it:

"Bein Rotmulaagge! What foul Words are these?

Once he has landed on the ground, he will say:

"Now we will see whose thu'um is the stronger!"

"You are strong, Dovahkiin. Rinik mul. But not strong enough."