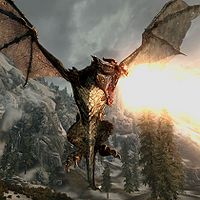 Mirmulnir is likely the second dragon you will encounter in Skyrim, after Alduin. The dragon appears during the quest Dragon Rising at the Western Watchtower. He can be a challenging enemy if your level is low and you have only melee weapons. If you are heavily injured you can go inside the watchtower to heal yourself while resting, or stay there and do nothing while the guards attack him. Using lightning or ice magic on him would be wise since he is resistant only to fire. As with other dragons, after Mirmulnir is killed you can take from his corpse dragon scales and dragon bones, as well as random treasure and several unique pieces of Whiterun guard armor.

The type of dragon that Mirmulnir is depends on your level.