The Temple is a Dunmer place of worship in Raven Rock.

It is found up a flight of stairs, opposite the jetty between Caerellius House and Morvayn Manor. It is above the Ulen and Morvayn Ancestral Tombs. 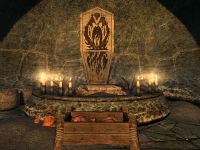 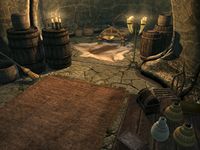 Downstairs, first door on your left is Elder Othreloth's bedroom. The bed is opposite the door and on the left as you enter is a set of shelves containing seven bowls of bone meal, as well as copies of The Red Year, Vol. I and Vol. II. There are four barrels in the room, two of which contain foodstuffs; on one is a copy of The Five Far Stars. Opposite the shelves is a round wooden table and two chairs. On the table are two bottles of sujamma, a bottle of shein, copies of The Reclamations, Bone, Part I and Part II, and an expert locked strongbox. 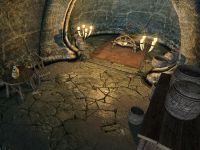 The first door on the right is Galdrus Hlervu's bedroom. As you enter, to your left is a barrel of ingredients with three bottles of alto wine and one bottle of wine on top. There is a table and chair to the right of this holding a bottle of sujamma, a bottle of shein and a copy of Deathbrand; there is also a bottle of wine on the floor beside it. Opposite is a set of shelves containing copies of History of Raven Rock, Vol. I, II and III, The House of Troubles, and The Doors of the Spirit. To the left is an unlocked chest. At the end of the corridor is the door to Temple Ancestral Tomb, which needs a key to open. This can be obtained as part of the relevant quest or pickpocketed from either Elder Othreloth or Galdrus Hlervu.