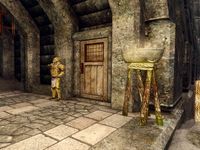 The Bulwark is an imposing wall of stone created to protect Raven Rock from ash storms, with both the garrison and jail built directly into the wall itself. The outward face of the Bulwark is nearly buried in ash, through which a tunnel has been dug to give access to the main gate and the only access through the Bulwark.

For historical information on the Bulwark, read History of Raven Rock. 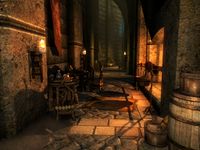 Redoran guards are posted at the entrance to the city, beside both entrances to the garrison and jail.

Upon entering the garrison you will find a narrow long room with several barrels on the right, against the north wall, with a large fireplace with a cooking spit in front of it. Opposite this, against the south wall are a couple of round wooden tables and chairs with a bottle of Flin, a bottle of sujamma, two bottles of Nord mead, a sweet roll, a cooked beef steak, an ash yam, a horse haunch, a baked potato. There is also a notice that has been posted by Captain Veleth reminding the Redoran guard that emberbrand wine and similar contraband is off limits on top.

To the right of the tables are a row of six weapon racks holding a selection of Iron, steel, and elven weapons. From this point to the end of the room there are a total of five single owned bed and two owned cots against the walls for use by the Redoran guards. Along the south wall among the beds is a sideboard holding various alcoholic beverages and a copy of The House of Troubles, an open crate containing five ash yams, and towards the end of the room a set of shelves holding a bottle of flin, a bottle of sujamma, a bottle of matze, a complete set of bonemold armor, including helmet, gauntlets, boots and cuirass and copies of Confessions of a Dunmer Skooma Eater, The Red Year, Vol. I, and both Part I and Part II of Bone. Along the north wall among the beds is an evidence chest and opposite the set of shelves a long table and chair with a couple more bottles of alcohol, a cooked beef steak, an East Empire Company strongbox and a copy of The Axe Man.