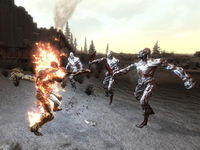 Captain Veleth is the leader of the Redoran Guard in Raven Rock, the capital of Solstheim, his powers only surpassed by Councilor Morvayn and his second-in-command Adril Arano. Recently, Raven Rock has experienced several attacks by ash spawn and Captain Veleth is naturally trying to figure out what is going on. South of Raven Rock lies the burned-out Old Attius Farm where you will find Captain Veleth fighting several ash spawn, immediately starting the quest. Help him defeat the enemies and he will be quite grateful, saying: "Thanks... I wasn't sure I'd make it off this farm alive. I wish I could have said the same for my man here.", obviously referring to the dead Redoran Guard nearby. He then proceeds to tell you about the ash spawn attacks and that he was searching for clues at the old farm when he was attacked. You will now have three different options, each with a different response:

I'd be glad to lend you a hand. "Good, I can use all the help I can get."
I could lend you a hand... for a price. "Hmm. I think I could talk the councilor into paying you, and I could use an extra pair of hands."
Seems like a waste of time to me. "It's easy to criticize when you're just a visitor here. Since you're brimming with self-confidence, maybe you'd care to take over for me?"

Regardless of your choice, Captain Veleth will then proceed to tell you why he was at the farm and task you: "We were searching the farm when the ash spawn ambushed us. Have a look around and see if you can turn up anything useful." You can now ask him several questions about the attacks and he will explain that he believes that someone is controlling the ash spawn and that the abandoned farm is his only clue as the enemies seem to emerge from there. Search the ash piles from the defeated enemies and you will find the Declaration of War, a strange note written by Falx Carius, a general living at Fort Frostmoth. Tell Captain Veleth about the letter and he will be surprised and tell you about the author of the note: "Carius was the Imperial garrison commander at Fort Frostmoth, but he died over 200 years ago when the Red Mountain leveled the place. There's no way he could still be alive." He will then ask you to investigate while he "rallies the guard" back in Raven Rock.

While Captain Veleth returns to Raven Rock, head east from the farm and you will soon arrive at the ash-covered Fort Frostmoth, where a mysterious voice will shout out: "Men, an invader has entered the fort! Prepare yourselves for an ambush!" After this, several ash spawn will attack and shower you with firebolt spells while the voice continues: "Fort Frostmoth will never fall! Long live the Empire!" Fight them all and enter the fort. The interior is covered in ashes and old imperial armor sits on the knocked-over shelves, hinting at the original inhabitants 200 years back. Before long more ash spawn will detect you and attack, so pick the fight and locate the path to the north. In the next chamber, search around for the skeletal remains of Maximian Axius and read all of his letters to Selina for a bit of background story of what happened at the fort when Red Mountain erupted. The path to the west leads to a dead end and a nest of albino spiders. A gate with a master lock gains access to a storeroom with all the ingredients needed to make a large quantity of Elsweyr Fondue. 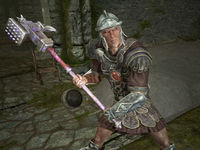 Take the northern path and you will end up in a huge tomb filled with coffins. At the intersection, where an ash spawn lies in wait, take the western path first and search the knapsack for the Fort Frostmoth Key and read through the informative Ildari's Journal that sits on the coffin in the center. It is the journal of a conjurer named Ildari Sarothril who uncovered the tomb and started experimenting with using heartstones to reanimate the dead bodies of the imperials, including the deceased general Falx Carius. She succeeded but the general slowly became hostile and she had to abandon the experiment.

With the key in hand, return to the first room and unlock the wooden door next to Maximian Axius's skeleton. (though you could also use the key to unlock the gate with the master lock, if you were unsuccessful or found lockpicking it too difficult). Head up the stairs and you will soon spot your target in the distance, Falx Carius himself, reanimated and still fighting to protect Fort Frostmoth, thus sending ash spawn to what he believes are enemies living in Raven Rock. If fought toe to toe, he is a very powerful foe and won't go down easily, nor will the ash spawn minions around him. Sadly, none of General Carius' armor can be looted, but claiming his unique enchanted warhammer Champion's Cudgel should serve as a consolation prize, along with the large chest nearby. Afterwards, leave Fort Frostmoth via the ladder to the south.

Back in Raven Rock, Captain Veleth will have picked up his usual routines but will be eager to hear news from Fort Frostmoth. When you tell him that you killed the reanimated General Falx Carius he will be pleasantly surprised: "I had my suspicions that he was undead. How else could he have survived for over 200 years? It's a shame. There are quite a few tales of General Carius's exploits, including the founding of Raven Rock. Councilor Morvayn told me to give this to you if you made it back in one piece... and you got rid of General Carius." He will then hand you a leveled amount of gold as reward. Once you have completed this quest and The Final Descent, Captain Veleth will have another task ready for you, namely the quest Served Cold.