Once you have completed The Way of the Voice, you will be approached by a pair of hostile cultists at the first city or town you enter. These cultists will question you, "You there! You're the one they call Dragonborn?" You have several dialogue options with which to respond: 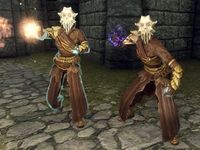 "You there! You're the one they call Dragonborn?"

No matter what dialogue option you choose, however, the response will always end with the cultists' saying: "When Lord Miraak appears all shall bear witness. None shall stand to oppose him!" You also have the option to walk away from the cultists. Doing so will cause them to taunt you: "You cannot escape the truth. You cannot escape the True Dragonborn! When Lord Miraak appears all shall bear witness. None will stand to oppose him!" Whether you engage in dialogue or walk away, the cultists will attack you. Once they lie dead, search them for the cultists' orders. This now initiates the actual quest and directs you to speak with Gjalund Salt-Sage at the Windhelm docks about passage into Solstheim. 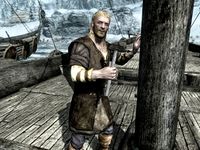 "If you're looking for passage to Solstheim, you won't find a finer vessel than the Northern Maiden."

Once you arrive at the docks, head over to a boat called the Northern Maiden and speak with Gjalund Salt-Sage about passage to Solstheim aboard his vessel. You will have different dialogue options with Gjalund depending on your status with the cultists. If you have not yet encountered the cultists, continue reading onward (see notes for further information). However, if you have encountered them, skip to Finding Answers section below.

Approaching Gjalund, he will proudly state, "If you're looking for passage to Solstheim, you won't find a finer vessel than the Northern Maiden." From this you can choose to either ask how much the fare is (250 gold) or to further inquire about the island. If you choose to question him about Solstheim, he will exclaim "Surprised you've never heard of it. It's an island northeast of here. Has a small dark elf town called Raven Rock and a handful of Nords living in Skaal Village. People don't usually sail over there unless they have a particular reason. It can be a pretty rough place." Once you pay the fare, he will tell you "You've got yourself a ship. We'll cast off immediately." If you change your mind, he will sternly say "Suit yourself. I'll be here if you change your mind."

Having already encountered the cultists, approaching Gjalund will have a somewhat different response: "If you're looking for passage to Solstheim, too bad. I'm not going back there anymore." From this point onward you have several dialogue options to choose from.

If you choose to ask him if he's the captain, he will suspiciously confirm "Sure. Yeah. That's me. Why? Who sent you?" Stating that you were attacked by the cultists, he will exclaim "Now hold on! That wasn't my fault... I didn't know they were going to attack anybody. I don't even know how I got here." Further questioning him will lead him to tell you "It's hard to explain... I remember those people with the masks coming on board, then... Next thing I remember, I was here and they were gone. That's not right, losing whole days like that. There's been something strange going on there for a while, but after this... I'm done. I'm not going back to Solstheim." If you try to convince him otherwise, he will object "Have you been listening to me? I'm not going back there." You can also inquire about Solstheim, to which he will answer "Surprised you've never heard of it. It's an island northeast of here. Has a small dark elf town called Raven Rock and a handful of Nords living in Skaal Village. But I'm not going back there. There's something wrong about that place." Leaving the conversation and approaching him again, you will be able to tell Gjalund again that you need a passage into Solstheim, to which he will respond "I already told you, I'm not going back to Solstheim." However, now you have several dialogue options available at your disposal:

When you set sail and arrive on Solstheim, Gjalund will comment, "Well, here we are. This is Raven Rock. Can't say I'm all that glad to see it again. Good luck. Maybe you can figure out what's going on around here." The Northern Maiden will then arrive shortly afterwards at the docks. 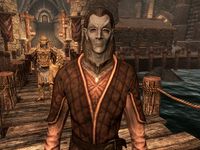 "I don't recognize you, so I'll assume this is your first visit to Raven Rock, outlander. State your intentions."

Upon arrival at the docks of Raven Rock on Solstheim, if you have never been here before, you will be approached by Adril Arano, the Second Councilor of Raven Rock. At this first meeting he sternly greets you with, "I don't recognize you, so I'll assume this is your first visit to Raven Rock, outlander. State your intentions." Depending on quest actions, you are given two or three options to reply to him. If you have already started the quest, you can question him if he knows someone named Miraak, to which he will reply, "Miraak... I... I'm not sure that I do." Further questioning him, he will respond "I... I'm unsure. I swear I know the name, but cannot place it." Pressing him further about the issue, he will then reveal, "I don't think so. I'm not... The name has something to do with the Earth Stone, I think. But I'm not sure what." This now gives you the optional objective to investigate the shrine. Regardless of which, Adril will then depart the conversation by saying "Just remember, Raven Rock is sovereign territory of House Redoran. This is Morrowind, not Skyrim. While you're here you will be expected to abide by our laws." The location of the Earth Stone is almost directly west of the docks, a short distance away from the settlement of Raven Rock. However, visiting the stone itself is purely an optional objective and is not necessary in order to advance through the quest. 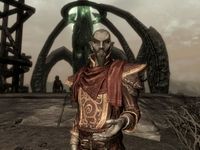 "You there... You don't seem to be in quite the same state as the others here. Very interesting. May I ask what it is you're doing here?"

Upon arrival at the stone, you will notice several of the inhabitants of Raven Rock alongside some of the Redoran guards working on what appears to be a mysterious shrine surrounding the stone. Walk toward the shrine and you will be approached by Neloth, a Telvanni wizard, and you may ask him about what is happening. He will either remark: "You there... You don't seem to be in quite the same state as the others here. Very interesting. May I ask what it is you're doing here?", or simply ask you what brings you to Raven Rock. When you explain to Neloth that you are searching for Miraak, he will exclaim: "Miraak... Miraak... It sounds familiar, and yet I can't quite place... Oh. Wait, I recall. But that makes very little sense. Miraak's been dead for thousands of years." Inquire about the meaning of this and he will answer: "I'm not sure, but it is fascinating, isn't it? Perhaps it has some relation to what's going on here. Quite unexpected. I'm afraid I can't give you any answers. But there are ruins of an ancient temple of Miraak's toward the center of the island. If I were you, I'd look there." This will now direct you towards the Temple of Miraak to investigate further about the cultist attack.

You may also choose to further question Neloth. Asking what exactly they are building, he will reply: "Building something, clearly. And yet they don't seem to have much to say about it. I'm very interested to find out what happens when they finish." If you also question him as to stopping the workers, he will exclaim: "Certainly not! Doing so would interfere with whatever is going on, and I would be unable to see how this all turns out." 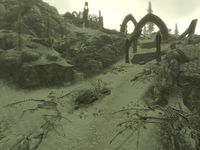 Dragon skeletons litter the pathway leading up to the temple.

If you choose not to visit the Earth Stone, you can speak with various citizens of Raven Rock about Miraak. You will realize that most citizens recognize the name, but are uncertain why, just like Adril. Some will again mention the Earth Stone, while others will mention the Temple of Miraak. Once you've been told about the location of the temple, a new objective marker will lead you there.

In order to reach the temple, head east from Raven Rock, towards the center of Solstheim. As you approach the exterior of the temple, you'll see skeletons of several dragons littering the pathway leading up to the temple. As you climb up the stairs and further to the temple, you'll see many of Miraak's thralls working to rebuild it. They will also be chanting, as were the thralls at the Earth Stone. None of the enthralled people will attack you, but some cultists will appear and become aggressive if you wait outside of the temple too long. Once you reach the center of the exterior portion of the Temple of Miraak, near the Tree Stone, this quest will be complete, and the next quest will begin automatically.

One achievement is unlocked during this quest if you have not yet visited Solstheim: