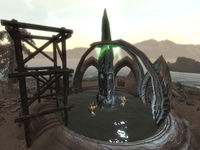 The Earth Stone is an All-Maker stone located southwest of Raven Rock. 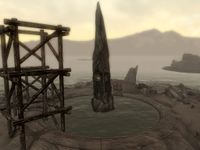 Once cleansed, this stone gives you the Bones of the Earth power, which lets you ignore 80% physical damage for 30 seconds. Once you use this power, it disappears from the powers section and you have to go back to the Earth Stone to get it again.

This is likely the first stone you are going to encounter due to its proximity to Raven Rock. It lies to the southwest of the city, near the end of a small peninsula. Bralsa Drel, Rirns Llervu and three Redoran Guards will be working here nonstop until the stone is cleansed, with more Raven Rock inhabitants joining them at night. There are numerous scathecraw and a few trama root plants on along the path from Raven Rock and around the stone, while several nightshade and spiky grass plants can also be found around the stone. Along the shoreline, there are several clams and a couple of pearl oysters. Around the construction site are the normal pickaxes, shovels, hammers and carts.

When you cleanse the stone, a leveled Lurker will appear from the water around the stone and attack you and the workers. The Redoran Guards will initially aid in the fight, but are likely to flee with the inhabitants of Raven Rock. Once this leveled Lurker has been dealt with, a second lower level Lurker emerges from the sea to the west.