The UESPWiki – Your source for The Elder Scrolls since 1995
< Online: Skills: Ardent Flame
Jump to: navigation, search 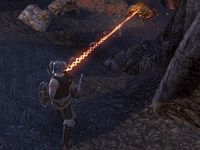 Fiery Grip deals fire damage and pulls the target of the attack towards you, and also increases your Movement Speed for a few seconds. This can be useful for getting close to ranged enemies who generally try to attack from a distance. It can also be used to pull a single enemy out of a group and deal with them individually. With a little luck and careful judgement of distance, you can sometimes do this without alerting the whole group, allowing you to deal with them one at a time. The Empowering Chains morph will pull you to the enemy instead and grants you Major Empower, increasing the damage of your next attack. Or you can choose Unrelenting Grip, which will refund its casting cost if the enemy cannot be pulled. It still deals the Fire Damage if this occurs, at zero cost, so it can be a cheap (if not very powerful) fire attack on immovable enemies.

With the Unrelenting Grip morph, you will be refunded the Magicka cost if the target cannot be pulled.