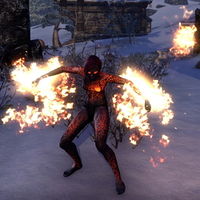 Inferno passively increases spell critical and launches fireballs at nearby enemies while active. The Flames of Oblivion morph also passively increases your Weapon Critical rating, and can scale on either Magicka or Stamina, whichever is higher (though the casting cost is still in Magicka either way). The Cauterize morph no longer deals damage, but instead heals nearby allies for the effect's duration.

1.6.5
* This ability has completely changed. It can now be toggled, has no cost, and deals no area of effect damage. Instead, when toggled on, Inferno will fire a projectile at the nearest target within 15 meters while in combat. In addition, Inferno provides the Major Prophecy buff while active.
2.3.5
* This ability and its morphs are no longer toggle abilities; instead, they will grant their Critical Strike rating benefit as long as they are slotted.
2.7.5
* Fixed an issue where this ability and its morphs would display an incorrect Spell Critical Strike Chance percentage on your character UI after swapping weapons.
2.7.8
* Magelight: Fixed an issue where this ability and the Inferno morphs were stacking with each other. You will now only gain 10% increased Spell Critical if both abilities are slotted on your bar.
3.0.5
* Reduced the cost of this ability and its morphs by approximately 33%.
3.0.7
* Flames of Oblivion: Fixed an issue where the Major Savagery buff granted by this morph was stacking with other sources of Major Savagery.
3.2.5
* Cauterize: Increased the speed of the projectile from this morph by approximately 50%, and the projectile can now target the casting Dragonknight.
4.0.5
* Increased the range of the heal from this morph to 28 meters from 15 meters.
5.0.5
* This ability and its morphs now operate like the Flames of Oblivion morph, where they will scale with your highest offensive stats. Also increased the power of these abilities by 5%.