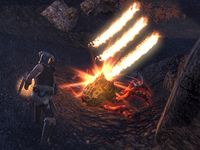 Searing Strike deals Fire Damage to an enemy and applies fire damage over time. The Venomous Claw scales off Stamina and Weapon Damage, and deals Poison Damage, with increased damage the longer the effect lasts. The Burning Embers morph heals you at the end of the effect.

This Elder Scrolls Online-related article is a stub. You can help by expanding it.
Retrieved from "https://en.uesp.net/w/index.php?title=Online:Searing_Strike&oldid=2583598"