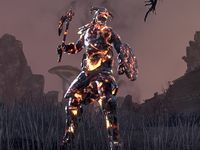 A character affected by Magma Armor

Magma Armor caps incoming damage and deals Fire Damage to nearby enemies. The Magma Shell morph adds a Damage Shield for you and your allies. Or you can choose Corrosive Armor, which changes the damage to Poison and causes your attacks to ignore your enemies' Physical Resistance while the effect is active.

1.1.3
* Reduced the duration of this ability.
1.3.3
* This ability no longer stacks if you recast it before the duration expires. We also fixed an issue where this ability was doing 10x damage than intended.
1.5.2
* Increased the damage dealt by this ability by 30%. The damage increases with each rank for the first four ranks, and then remains constant for both morphs. The explosion from this ability and its morphs now does fire damage; the inhalation still does Magic damage.
1.6.5
* Magma Shell: Reduced this ability's Synergy radius to 2.5 meters, and increased the strength of the shield produced by the Synergy to 100% of your maximum health from 85%.
2.3.5
* Magma Shell:
2.4.5
* Corrosive Armor: This morph now deals Poison Damage instead of Flame Damage. It now also has a new icon.
5.0.5
* Earthen Heart: Adjusted the duration of these skills so that their final ranks land on integers rather than fractions when you have Rank 2 of Eternal Mountain. This has resulted in the following duration changes:
5.1.5
* Corrosive Armor:

This Elder Scrolls Online-related article is a stub. You can help by expanding it.
Retrieved from "https://en.uesp.net/w/index.php?title=Online:Magma_Armor&oldid=2680575"