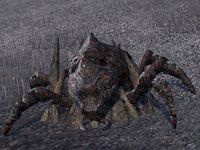 Petrify disorients enemies for a long period of time, and deals damage when the disorientation ends. Ideally, you should attack other enemies, because if the petrified target receives enough damage, the disorientation will end early. More powerful enemies tend to be immune to the stun effect, but will still take damage. The Fossilize morph Immobilizes the target after the effect ends, while Shattering Rocks causes their next attack to heal the target.

We wanted to differentiate Petrify from Stonefist because now, they both stun enemies. The cost reduction and lack of damage make Petrify more utility-focused, while Stonefist deals more damage but requires more Magicka.
Additionally, the last change helps further differentiate the Petrify and Stonefist abilities, and makes it more risky for the Dragonknight to apply Petrify's instant, unavoidable crowd control on an enemy.