Skingrad is a large town located in the West Weald region of Colovia, to the southwest of the Imperial City, along the Gold Road. The town divides into three districts: the Castle, Hightown, and Chapel, with various gates and bridges connecting each district. The town is further divided in two parts: the north wall encompasses the business district and the guild halls, while the southern half holds homes and the Great Chapel of Julianos, where citizens and travelers can pray for healing. Outside of town is the castle of Janus Hassildor, count of Skingrad and wizard, who is reportedly a vampire, a fact known to and kept as a secret by the Mages Guild. The town is particularly famous for its wines, tomatoes, and cheeses, which contributes to its overall prosperity. Famous wine makers in Cyrodiil such as the Surilie brothers and Tamika reside here.

For more information about Skingrad, see the lore article.

The Count refuses to see you until you start one of several quests that involves him. Outside the walls of Skingrad are the two best vineyards in all Cyrodiil, belonging to Tamika and the Surilie brothers. Skingrad is involved with the production of much of Cyrodiil's wine. The house available for purchase here, Rosethorn Hall, is located in northern Skingrad and is the largest and most expensive that you can buy.

The city also features a house filled with undead, a sealed house with an interesting party in it, and a necrophiliac alchemist. The Skingrad guards wear armor consisting of steel gauntlets, greaves, and boots, instead of the chainmail used by guards in other towns. Much like Anvil, Castle Skingrad is found outside the city walls, on a nearby hilltop overlooking the town.

Statue of Rislav the Righteous near the Mages Guild Hall 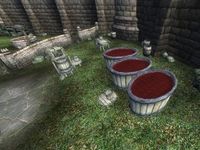