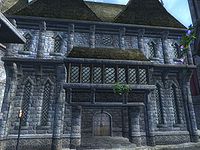 Summitmist Manor is a large house located in the northeastern part of Skingrad, just west of the east gate. It is situated beside Nerastarel's house and across from Toutius Sextius' house and Rosethorn Hall. It contains three zones, Summitmist Manor, Summitmist Basement and Summitmist Living Quarters.

The main floor of Summitmist Manor is architecturally complex. Upon entering, to the north, are two open staircases leading up to balconies which are linked by a second story dining area. Immediately to the left and right are wide stairs leading down to sunken living areas. Turning to the west (your left) you descend into the library. On its south wall there is a desk and chair with a chest to its right. In the southwest corner is a small round table and a triple wooden backed seat. On the west wall is a three part bookcase with each part having four shelves. Each part is capped by an arched opening. The center part holds two burning candles on its second shelf. In the northwest corner there is a single wooden chair. In the northeast corner is the door to the Summitmist Basement.

Moving west back up the five steps, across the entryway level and descending again you enter another sunken living area. There is a fireplace on its north wall faced by another triple wooden backed seat. The east wall has an identical three part bookcase mirroring the library area, but it lacks the candles. On the south wall is a round table with two chairs.

Leaving the lower floor of Summitmist Manor by way of the western staircase, the overlook landing has a fireplace on its north wall. To the right of the fireplace is another triple wooden backed seat, a small round side table, and a single chair. To the left is a small round side table and single chair. The west wall has a set of drawers and to the south is the balustrade for the overlook.

Turning east you'll see the dining area with a large round table and six chairs. The southern wall of the dining area has windows flanked by tall four-shelf display cabinets and to the left of the windows, a single cupboard.

The eastern overlook landing has a cupboard in the southeast corner against its balustrade. On the east wall there is a chair and a set of drawers topped by a four-shelf bookcase. The north wall is bare but to the west is the staircase to the Summitmist Living Quarters.

The Living Quarters door opens onto a hallway running north to south with three bedroom doors. At the north end is an alcove with four chests. Two flat-topped chests are piled upon each other on the east wall and flanked on either side by two curved top chests. At the south end of the hall is a wall table with a ceramic vase.

The northwest bedroom, directly across from the entry, has two single beds headed on the north wall each with a chest at its foot. Its southwest corner has a desk and chair. On the south wall are two armoire style cupboards. It has no windows.

The southwest bedroom has an armoire style cupboard and two single beds headed on the north wall each with a chest at its foot. The west wall has a three-shelf bookcase topped by a ceramic vase. The books are typical with the most expensive being The Argonian Account, Book 2 and Book 4. Its southwest corner also has a desk and chair. The south wall has two windows. The southeast corner has two chairs and a low square coffee table.

Across the hall is the southeast bedroom. On its north wall is a square table and a triple wooden backed chair. An alcove off the north wall has a desk topped with a candle and a chair in its northwest corner. On the east wall is a set of drawers topped with a four-shelf bookcase. Continuing along the east wall back into the bedroom there are two single beds headed into it, each bed with its own small round table nightstand. The southern wall has two windows and two flat-topped chests. The chest to the left has an Iron Mace and a complete set of Legion heavy armor. Toward the southwest corner is another armoire style cupboard with two ceramic vases on top. On the west wall is a four-shelf bookcase with a ceramic bowl on top.

You descend a long stone staircase into a large room with three large posts supporting the floor joists above. The post on the left has four garlic strands hanging from it. Turning to the left there is a work table and stool against the short west wall. On the north wall is a cupboard, a wine cask with a spigot, and a barrel.

To the west, a long hallway leads to another room. The north wall of the hallway has two grain sacks. This smaller room has only one large post for the floor joists. The southeast corner has a wine cask with a spigot. The west wall has a three-shelf storage unit lit by a candle on a stand. On the north wall is another four-shelf storage unit with pewter dishware, a barrel, and a basket.