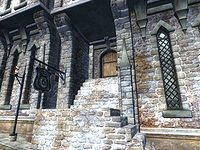 Two Sisters Lodge is the cheaper of the two inns in Skingrad, located in the city's southern half. It is found southeast from the West Gate, next to Salmo the Baker's House and across the street from Reman Broder's House and the Surilie Brothers' House.

The proprietor, Mog gra-Mogakh, buys potions and food while only selling the latter. There are three floors in this inn: the lowest floor contains the reception area and dining room; the middle floor contains nothing more than a few chairs and a door to a balcony; and the rooms can be found on the top floor.

There are four bedrooms upstairs, two twin rooms and two doubles. The southernmost room, one of the doubles, is the one you can rent. It is spacious and contains a middle-class double bed, three chests of drawers and a writing desk. The other three rooms are all locked and none of the beds inside can be slept in.