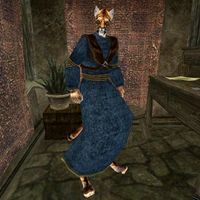 Ajira is a Khajiit alchemist and an Associate of the Mages Guild. Ajira can be found in the alchemical storeroom on the lower level of the Balmora Guild of Mages, behind her desk and near the guild guide, Masalinie Merian.

Ajira starts by offering relatively simple first line quests for the Mages Guild which generally involve gathering various ingredients from the Bitter Coast and Ascadian Isles for her alchemical exploits. Her quests also involve her bet with Galbedir on who will reach Journeyman rank first, which allows you to easily steal loot worth more than 60k from Galbedir. Her later quests become far more difficult, involving the acquisition of extremely valuable artifacts.

In addition to her restocking supply of alchemy ingredients, she carries and wears extravagant pants, a common robe, and an expensive amulet.

As a Khajiit, Ajira possesses the natural ability to see well in the dark and to demoralize others for short periods of time. Moreover, Ajira knows the following spells: Dispel, Spell Absorption, Calm Creature, Summon Ancestral Ghost, Fifth Barrier, Ulms's Juicedaw's Feather, Strong Feather, Bound Shield, Bound Cuirass, Bound Gauntlets, Bound Helm and Bound Boots (even though the last two are useless to a Khajiit like her).

Being Khajiit, Ajira is one of several merchants who will buy moon sugar and skooma.