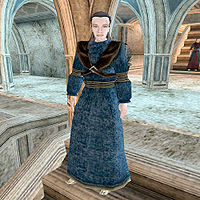 She is a very dedicated scholar of the Dwemer, and, according to rumors has almost figured out how to create her own Centurions. As such, the majority of her quests revolve around her Dwemer-related studies. She is not above using theft if it aids her research.

She has been witnessed by the Guild's doorman, Orrent Geontene, in saying that Arch-Mage Trebonius Artorius doesn't really care about scholarship.