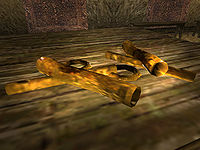 "Scrap metal refers not to common scraps of iron and steel, but to bits of exotic metals recovered from animated Dwemer artifacts like the centurion. Such metal is rare and precious, and prized both by collectors of antiquities and students of metals and enchantments."

Scrap metal is found in fairly decent supply in all Dwemer ruins. It can be found both by killing Dwemer centurions, and looking in the barrels and other containers in these places. The Empire has passed laws restricting the sale and export of scrap metal and all other items of Dwemer origin, but few people in Morrowind seem to particularly care. Its low value:weight ratio means it is generally not economical to collect it, unless you want to use it for potions. You will also need several pieces of scrap metal for the Scrap Metal quest for Radd Hard-Heart in the Imperial Legion, the Retrieve the Scrap Metal quest for Aengoth the Jeweler in the Thieves Guild and the Dwemer Warbots quest in Tribunal.

The following vendors are all apparently breaking Imperial law, since they carry a restocking supply:

Loose samples can be found in the following locations:

Scrap metal is one of only two ingredients which can be used to create resist shock potions, the other ingredient being crab meat.