Commerce in Morrowind is fairly simple. Prices are determined by two things:

Both these factors affect all types of commerce, even those that do not involve trading items, for example: buying spells, enchanting items, spellmaking, repairing items, receiving training, and transport.

Very few prices in Morrowind are non-negotiable. These exceptions include donations at shrines or paying for a bed at taverns, though these, in general, have a very negligible cost.

Base value is the value an item has displayed in your inventory. Almost all vendors raise their selling price and lower their buying price depending on how much they like you. Thus, they will never offer to buy or sell items at base value.

Additionally, if the item is a weapon or armor, the buying price will be lowered if the item is damaged. To get the best price, make sure your items are fully repaired before you sell them. It's always cheaper to repair them yourself, rather than paying a smith for the service.

Note that enchanted items with a charge on them will sell at the same value even if their charge is completely depleted, so there's no need to recharge them first.

All merchants have a fixed amount of gold with which to purchase items. If you try to sell a merchant something worth more than that, they can offer you only up to that amount. If you accept that offer, they won't be able to afford anything you sell them for the next 24 hours. The merchant's gold then resets to its default amount after that period.

One way to get your money's worth with more expensive items is to buy something from the vendor first, temporarily increasing their available gold, then selling your expensive items afterwards. You can then take the item(s) you have bought and either sell them to other vendors, or sell them back to the same vendor the next day. Merchants also keep items you have sold them in the past, so if you have sold them some items for their maximum gold, you can buy those items at a later time so they can afford to buy even higher-priced items from you.

Another way to increase a vendor's gold will work only with merchants who are also enchanters or spellmakers. Custom-made enchantments and spells tend to have high prices, so immediately after purchasing one, you can then take the opportunity to sell your expensive items back to the merchant, thus recouping the cost of the services. The tricky part is finding merchants who can buy the items you wish to sell but also provide one of these services, of which there are few.

Yet a third (and highly unorthodox) method is to actually sell the merchant gold. All merchants buy gold, and every gold piece you sell them increases their supply of available gold. Best of all, when the merchant's gold stock resets, any gold you have sold them remains in their inventory. Thus, when you return at a later time, they can still afford to buy more expensive items from you. Note that after a week of not visiting a vendor, their inventory may reset to its default values.

A lot of vendors "restock" certain items, which means that they will always have a certain (often small) amount of those for sale. Regardless of how many times you buy those items from them, their stock will never deplete.

If you need a lot of these items (eg. ingredients from alchemy vendors, soul gems from Fadase Selvayn, etc.), you might find it tedious to buy a small amount multiple times and would like the vendor to restock more of the items you need. To solve this problem, simply sell the items you need to the vendor.

For example, Arrille always keeps a stock of 100 chitin arrows. If you have, say, 50 chitin arrows with you (even ones bought from him), just sell them to him and that will increase his stock to 150. From then on, you'll be able to buy chitin arrows from him in batches of 150. If that is still not enough, keep buying chitin arrows and selling them back to him until his stock reaches a satisfactory amount.

There are two special merchants who, because they are creatures, are unaffected by Disposition or Mercantile skill levels. Thus, they always buy and sell items for their base value. In addition, they also have more gold than most of the other merchants. 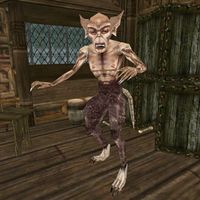 A scamp merchant inside Ghorak Manor in Caldera. It has 5000 gold available for trade. It can buy armor, enchanted items, potions, weapons and miscellaneous items. 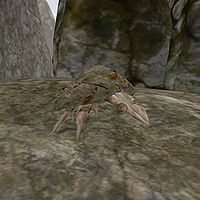 A mudcrab merchant on a small island east of the Dwemer ruin of Mzahnch. He has 10000 gold available for trade, more than any other merchant in the base game. He is a little bit more selective than Creeper, though; for example, he does not buy soul gems. However, he still buys armor and weapons, which tend to be the most expensive items anyway.

If you are looking for him, be aware that he looks exactly like any other mudcrab, and is named "Mudcrab", as well. To determine the correct mudcrab, either wait to see if it attacks or simply try to talk to it.