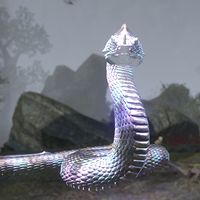 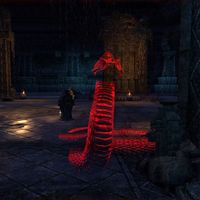 The Ghost Snake is the spirit of a giant snake which protects the Vale of the Ghost Snake in eastern Deshaan.[1] It is thought by scholars to bear some relation to Sithis, and is worshipped by the Mabrigash Tribe of Ashlanders. As part of a coming-of-age ritual, tribe members must walk the 'Coiled Path' through the swamps of the Vale, overcoming the giant snakes native to the region, as well as the angry ghosts of those who failed. The few that manage to reach the altar at the Fang Spires and commune with the Ghost Snake are granted great insight into navigating the twisting path of life.[2] In return for occasional human sacrifices to nourish and serve him as ghosts, the spirit helps guide the tribe. Most outsiders believe the Ghost Snake to be fictitious, made up by the tribe as a means of scaring away interlopers.[3]

The Ghost Snake is an entity of duality, and believes everything has an opposite. The spirit himself has a second side known as the Shadow Snake, a hostile spirit who attacks those who come to the Ghost Snake in order to test their worth.[3] According to the Ghost Snake's faithful, there are eight sacred aspects of the Ghost Snake: Serpent, Darkness, Devourer, Dreamer, Silence, Light, Death, and Rebirth. Each contains a truth, a lie, and a mystery that entwines upon itself, forever undulating like the coils of the great serpent.[4]

In 2E 582, a Hlaalu trading caravan attempted to make contact with the Mabrigash, who then went to the spirit for advice. Instead, the Ghost Snake told the tribe that it was their decision to make, with isolation and outside contact being two sides of the same path. The caravan's arrival had altered the Vale forever, and the Ghost Snake permitted the tribe to do as they please as long as they continued to worship him.[3]

It is unknown what decision the tribe made, but by 3E 427 the term "mabrigash" had come to define a renegade Ashlander wise woman who had forsaken tradition to master the dark arts and become a witch-warrior. They could manifest their power as a 'ghost snake', which would then paralyze and drain their victims. These witch-warriors were common on the island of Vvardenfell, but it is unknown how they relate to the tribe of the Vale.[5][6]