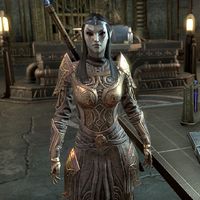 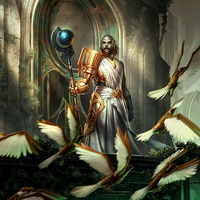 Those seeking to become an Apostle must possess great expertise in magic, machinery, or some other skill that they deem worthy. Apostles are known to replace their limbs with "perfect" clockwork parts designed by Sotha Sil. They consider this practice to be an expression of faith in their god as well as a means to improve upon what they consider to be flawed biological anatomy.[2][UOL 1] An infrequently observed tradition among the Clockwork Apostles is to enshrine their amputated body parts after replacement.[3]

Apostles are often seen as elitist by outsiders, and they are known to delegate menial tasks to others.[1] They follow the sermons of Deldrise Morvayn and devote their work towards one goal: achieving Tamriel Final, a new Nirn.[4][5]

The highest-ranking Apostles form the governing body of the City, the Congress of Calibration.[6] The highest rank of the Apostles is the Tourbillon.[UOL 1]

The Clockwork Apostles' legal system is relatively rudimentary, mostly because it is used so rarely. Infractions, such as research sabotage or plagiarism, typically result in exile. For more serious crimes, Apostles use a method of punishment known as a cognitive prison — an induced coma where the condemned's mind is set to a recursive loop, trapping them in an inescapable mental space. By the mid-Second Era, the punishment had only been used twelve times.[7]

Following the death of Sotha Sil, the Apostles were led by the Dunmer, Galyn the Shelterer, who took it upon himself to keep the Clockwork City's inhabitants alive. With the Mechanical Heart finished, the exiled Apostle Mecinar returned into the realm circa 4E 201, in an effort to claim it. This endeavor was a success, and Mecinar claimed the artifact's godly powers, and he began the process of converting the realm to his own image, turning the inhabitants into Abominations. The tyrant was stopped when the Forgotten Hero trailed him into the City, but stories differ from there. One rumor states that the Forgotten Hero destroyed the Heart, and the Clockwork City's inhabitants were forced to abandon it as it ceased to function.[8] Another account holds that the hero used the Heart to harness its power and fought Mecinar on equal ground, allowing the Heart to live on along with the city. The Heart's power overwhelmed the Hero and they disintegrated, it is claimed, but their consciousness lived on within the City. In this story, the Apostles remained in the realm.[9][10]

This Lore-related article is a stub. You can help by expanding it.
Retrieved from "https://en.uesp.net/w/index.php?title=Lore:Clockwork_Apostles&oldid=2638219"