High Elvish[1] (alternatively High Elven[2]:6 or Elvish)[UOL 1] is the language used by the High Elves of the Summerset Isles. It is descended from Old Elvish, and as such is very similar to its relatives like Ayleidoon, Ald Chimeris or the Falmer language. For the longest time, High Elven was the common language used in all legal documentation until it was later replaced by Tamrielic in 1E 2813.[2]:6 The common tongue of the empire, Cyrodilic, is based on the Altmer's speech and writing.[3]:7 To date, there are no known texts written in this language, but some words are known.

In Elvish there is no soft "c", so when a word begins with "Ce" or "Ci" it is pronounced with a /k/ sound. For example "Cey-Tarn Keep" is pronounced like "Kay-Tarn Keep". Similarly, the letter G is always pronounced /ɡ/, never /dʒ/.[UOL 2]

Calian
A praxic talisman, a symbol of a person's membership in the civilized High Elf society[17]
Canvaroth
Scout[18]
Cerum,[19] Ceruval[20]
Unknown, but known usage suggests a polite way to address someone (like "sir" or "madam"); both terms appear to have no gender-specific use

Daedra
Roughly means "Not our ancestors"[8]
De'nt
Unknown; usage suggests some form of an insult[21] 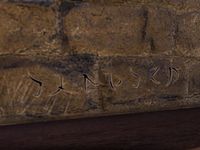 "Eluvein" written in the Altmer script

Eluvein
Another name for the hilas owl, which abandons its eggs after laying them. The term is also used to describe someone who is cold-hearted or aloof[22]
Ephem
Non-Altmer, outsider[23]