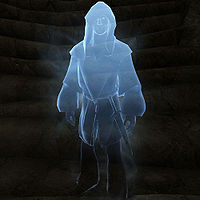 The Spectral Assassin is the spirit of an infamous and well-known Imperial assassin of the Dark Brotherhood, Lucien Lachance. He now serves Sithis as a spirit and, thanks to you, is able to continue his work. He can be summoned once a day with the power Summon Spectral Assassin, given as reward for completing Bound Until Death.

The Spectral Assassin is essentially a free follower. He will follow you anywhere at all times until he is killed (although he can get lost). He is equipped with the Dark Brotherhood shrouded robes with matching hand wraps, hood, and shoes, and attacks using a steel dagger. He counts as a summon similar to those created with Conjuration spells, and will occupy the slot as the one summon you are allowed without the Twin Souls perk (see Bugs section).

While he cannot be engaged in conversation, he will comment on many things while he is summoned, such as your current contract for the Dark Brotherhood, events from Oblivion, Sithis, and his own thoughts. It's also revealed that he traveled in Skyrim in his lifetime, prior to events in Oblivion, as he also remarks on each town you visit and his memories of the place. Lucien is able to communicate with Sithis, and ascertain the dread father's desires.

While summoned and following you, the Spectral Assassin can speak many lines based on the context of location, current quest, or other situations.