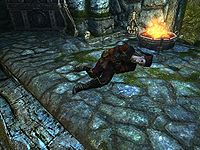 When you return from completing the Breaching Security contract, Gabriella will inform you that there was an incident with Cicero and directs you to discuss it with Astrid. Astrid reveals that Cicero attempted to murder her and the other members of the Dark Brotherhood, grievously wounding Veezara in the process. Arnbjorn pursued Cicero as he fled from the sanctuary. She asks you to search Cicero's room for clues as to his whereabouts. Inside the room you find five journals, with the final journal indicating that Cicero might be headed for the long-abandoned sanctuary outside Dawnstar. Astrid will grant you use of her horse, Shadowmere. Immediately outside the sanctuary he will rise from the black, bubbling liquid. Mount him if you wish, and head to Dawnstar's abandoned Brotherhood sanctuary.

You will find an injured Arnbjorn outside the sanctuary. He reveals that he and Cicero seriously wounded each other before Cicero escaped into the safety of the sanctuary and instructs you to "just follow the blood". A pass phrase is needed to enter the sanctuary; it can be found in the final volume of Cicero's journal ("Innocence, my brother"). Once inside, Cicero will begin to speak to you, taunting, as you search for him. At this point, summon Lucien Lachance for a bit more on the story. He strongly suggests that the Dread Father would not want you to kill Cicero. While the sanctuary is abandoned, it is not unoccupied. It is inhabited by ghosts of the previous Dark Brotherhood residents, who will attack on sight. The elusive Udefrykte also resides in one of the sanctuary's caves; it may be advisable to simply sneak by the troll when discovered. As you make your way along, the second room is a circular chamber with another room below and a bridge. The spike trap can be avoided by avoiding the bridge and crawling along the left-hand wall; there is enough of a ledge to allow this. Across the bridge at the foot of the stairs, you will find two skill books: Fire and Darkness and The Marksmanship Lesson.

Keeper of The Old WaysEdit

At the end, you will find Cicero curled up in a fetal position, apparently injured. Cicero cautions you that the Night Mother will not be happy if you kill him. At this point it is your choice whether to kill him or not. If you attack him he leaps to his feet, obviously unhurt, and gleefully screams "Haha! Behold the final trick of the Fool of Hearts! You think me near death? Haha! Think again." If you decide not to kill him, he returns to serve and tend to the Night Mother after you complete Hail Sithis!. He will also be a follower. Whatever your decision, the quest is now complete. Speak to Astrid to begin your next mission.