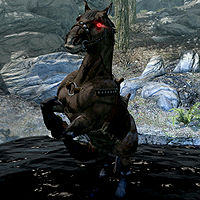 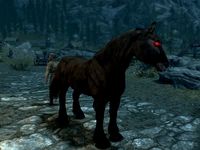 Shadowmere is Astrid's personal horse, received during The Cure for Madness, a Dark Brotherhood quest. Shadowmere has more health than any of the other horses in Skyrim and regenerates health extremely quickly. His introduction is rife with macabre undertones: rising up from the bubbling dark waters and black smoke. His appearance also has a strong Dark Brotherhood theme, with glowing red eyes and black hand-prints on his saddle blanket. Astrid claims that the horse is "one of us".

Shadowmere is not essential and can die, unlike his counterpart in Oblivion. However, 10 days later, he will respawn at the location of his death. If Shadowmere dies in a river or lake, he will respawn after 10 days in the black pool near the Dark Brotherhood Sanctuary.