This article is about the Dawnguard version of this mission. For the vampire version, see Prophet (Vampire). 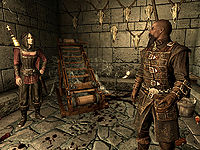 "You're a resource. You're an asset."

Once you have recruited Sorine Jurard and Gunmar into the Dawnguard, and Isran has welcomed them to Fort Dawnguard, you are told to follow Isran for a little interrogation session with the newly arrived vampire, named Serana. When asked what she is doing in the enemy fort, she will explain: "I'd rather not be here either, but I needed to talk to you. It's important, so please just listen before your friend, here, loses his patience. It's... well, it's about me. And the Elder Scroll that was buried with me. I'm guessing you figured this part out already, but my father's not exactly a good person. Even by vampire standards." She then proceeds to explain that her father once was a better person but stumbled upon a prophecy that foretold vampires could control the sun, thus not be afraid of daylight. She finishes with: "That's what he's after. He wants to control the sun, have vampires control the world." Serana and her mother tried to stop him from taking over the world, so Serana was sealed away with the scroll, to keep it from her father. She realizes she is in a fort filled with vampire hunters, but agrees to try and persuade Isran to let her help.

Once again, you will have to do the talking, although Isran will be his usual paranoid self: "All right, you've heard what it has to say. Now tell me, is there any reason I shouldn't kill this bloodsucking fiend right now?" Regardless of your choice, Isran will agree to let Serana help out, but will turn to Serana and let her know: "Don't feel like a guest, because you're not. You're a resource. You're an asset. In the meantime, don't make me regret my sudden outburst of tolerance and generosity, because if you do, your friend here is going to pay for it." While Serana can't help but make fun of Isran's anger, she will turn to you and remind you that she carries the Elder Scroll on her back and that it is necessary to read it to understand the prophecy. The only people who can read the scrolls are the blind Moth Priests who live in the Imperial City in Cyrodiil, a long way from Skyrim. Luckily, Isran noticed an Imperial scholar passing by on the road just a few days ago. He is unwilling to waste men looking for him, but suggests that you ask innkeepers or carriage drivers all over Skyrim. Serana, however, suggests the College of Winterhold as a place where a scholar would go. Either way, Serana feels adventurous and will be your follower on the search for the scholar.

You will face three different options, either asking the numerous carriage drivers parked all over Skyrim, asking the innkeepers in the various cities, or taking a trip to the College of Winterhold. It is also possible to just wander around Skyrim; if you come to the area south of Dragon Bridge where the Moth Priest was kidnapped from, then you can continue on with the quest even if you haven't done this part. See the table below for a list of options, conditions, and dialogue:

The Ambush at Dragon BridgeEdit 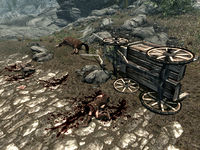 With all clues pointing to the small settlement of Dragon Bridge, travel there and ask the locals if they have seen a Moth Priest. Some will not even have the topic, while others will claim they know nothing about a traveling priest. Azzada and Michel Lylvieve will both suggest talking to a guard: "A Moth Priest? I'm sorry, but I don't know anything about that. Try asking one of the guards." Following their advice and asking a local guard will have him say: "Ah, so that was a Moth Priest, then? He rode through town not long ago with an escort of soldiers. They didn't stop, just headed south across the Dragon Bridge." The only other person people who ever noticed a caravan traveling through town is young Clinton Lylvieve, who will tell you: "I don't know what a Moth Priest is, but I did see an old man in a robe not long ago. He was riding in a wagon with some Imperial guards. They didn't stop to visit, though. They rode through town heading south, and went across the big bridge. It was only just a little bit ago. I bet you can catch them if you hurry up."

Head southeast out of town and cross the old bridge. Stay on the path and before long you will see signs of a roadside attack, an overturned cart, a dead horse, a bloodstained corpse, a copy of the book Effects of the Elder Scrolls, and a dead vampire. Examine the vampire and read the vampire's note. The note points you towards a place named Forebears' Holdout, apparently where the attackers dragged the Moth Priest. Follow the bloodstains over the bridge to the east until you reach yet another attacked cart, with two corpses: a Redguard and a Nord. Follow the blood spatters to the northeast until you reach five standing stones, and the entrance to Forebears' Holdout. 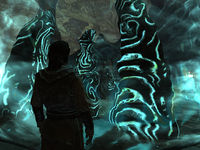 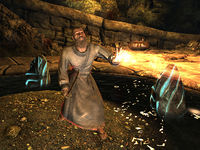 "I serve my master's will."

Head down the slope and around the corner. Before long you will land on a balcony in a huge chamber with a river, and what resembles an old interior fort with a patrolling vampire, and a bluish orb glowing on the other side. Sneak down the stairs to the south and watch out for two patrolling death hounds on the ground level. Cross the narrow bridge leading west and follow the wall until an opening reveals a huge bonfire. You will likely be detected by two vampires and two of their thralls, so dispose of them and make use of Serana as she is quite strong with her ranged attacks. Head up the stairs where Malkus, the author of the note, will be busy trying to enthrall the imprisoned priest.

Malkus: "The more you fight me, the more you will suffer, mortal."
Priest: "I will resist you, monster. I must!"
Malkus: "How much longer can you keep this up, Moth Priest? Your mind was strong, but you're exhausted from the struggle."
Priest: "Must... resist..."
Malkus: "Yes, I can feel your defenses crumbling. You want it to end. You want to give in to me. Now, acknowledge me as your master!"
Priest: "Yes. master [sic]."

Dispose of Malkus and claim the Weystone Focus from his corpse. Follow the marker up the stairs and activate the Weystone Source with the Focus you took from Malkus. The magical barrier will disappear and reveal the Moth Priest, although not in the state you expected. Instead, he will chant: "I serve my master's will. But my master is dead, and his enemies will pay!" The enthralled priest will then attack with everything he has got, so fight him until he yields. He will then stutter: "That... that wasn't me you were fighting. I could see through my eyes, but I could not control my actions. Thank you for breaking that foul vampire's hold over me." You can now ask him several questions, but first he will introduce himself: "I'm quite alright, thanks to you. Dexion Evicus is my name. I'm a Moth Priest of the White Gold Tower. These vampires claimed they had some purpose in store for me, but they wouldn't say what. Probably hoping to ransom me, the fools. Now tell me, whom do you represent, and what do you want with me?" When you introduce yourself as a member of the Dawnguard, and that you need him to read an Elder Scroll, he will prove quite knowledgeable: "You have an Elder Scroll? Remarkable! If my knowledge of history serves me, I recall that the Dawnguard was an ancient order of vampire hunters. I will be happy to assist you with your Elder Scroll. Just tell me where I need to go." When you tell him to go to Fort Dawnguard, he will immediately be on his way and you are to report back to Isran. Before leaving, loot the chest nearby then exit the same way you came.

When you return to Fort Dawnguard, you will find Dexion Evicus in the main chamber, facing Isran. Isran will confirm that Dexion has the Elder Scroll and is ready to start reading it. When you speak to the priest he will prove to be overwhelmed with joy: "Ah, my rescuer! It's good to see you again. It's not exactly the hospitality I'm used to, but your man Isran has seen to my needs well enough. And might I add, this is a remarkable fortress. I have colleagues back home that would love to study this place in detail." When you tell him to read the Elder Scroll he will begin: 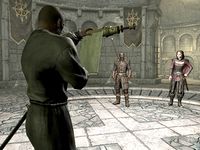 "Among the night's children, a dread lord will rise."
Now, if everyone will please be quiet, I must concentrate.
I see a vision before me, an image of a great bow. I know this weapon! It is Auriel's Bow!
Now a voice whispers, saying "Among the night's children, a dread lord will rise."
In an age of strife, when dragons return to the realm of men, darkness will mingle with light and the night and day will be as one.
The voice fades and the words begin to shimmer and distort. But wait, there is more here.
The secret of the bow's power is written elsewhere. I think there is more to the prophecy, recorded in other scrolls.
Yes, I see them now... One contains the ancient secrets of the dragons, and the other speaks of the potency of ancient blood.
My vision darkens, and I see no more.
To know the complete prophecy, we must have the other two scrolls.

This ends the quest and starts the next three quests, Chasing Echoes, Scroll Scouting and Seeking Disclosure.

Notes
* Any text displayed in angle brackets (e.g., <Alias=LocationHold>) is dynamically set by the Radiant Quest system, and will be filled in with the appropriate word(s) when seen in game.
Retrieved from "https://en.uesp.net/w/index.php?title=Skyrim:Prophet_(Dawnguard)&oldid=2706974"