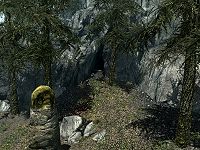 Forebears' Holdout is a small cave southeast of Dragon Bridge.

The entrance to the cave only appears once you start the related quest.

To locate the entrance to the cave, take the road south-southeast from Dragon Bridge. On the far side of the dragon bridge, regardless of whether you're a vampire or a vampire hunter with the Dawnguard, you'll encounter a carriage that's obviously been attacked. The horse has been killed and the carriage overturned, with the body of an Imperial soldier and a dead vampire nearby. The vampire carries instructions from Malkus to arrange an ambush on the road south of Dragon Bridge, and to take the Moth Priest to Forebears' Holdout for safekeeping. A short distance past the carriage, to the south, cross another bridge to reach a junction with a road heading northeast towards Morthal. Taking this road, you'll find several patches of blood on the ground. The path leading to Forebears' Holdout heads south from the road, with more patches of blood along it. There is a circle comprising five stone columns near the entrance, which is flanked by two trees, with a thistle growing by one of the columns.

Upon entering, you will be in a natural tunnel, with a lit brazier in front of you. There is a white cap fungus on the right. Just after the brazier, the tunnel turns to the southwest, with another lit brazier on your left and another white cap behind it. There is also a fly amanita fungus farther to the left.

The tunnel opens onto a ledge in a large cavern, with a stone wall along the front edge, and stairs leading down to the cavern floor to the left near several tall stone pillars. You can enjoy a good view of the whole cavern from here. Some areas are brightly lit, while others are in complete shadow. Immediately below you will see a powerfully flowing river coursing through the cavern from the south to the northwest. Opposite you on the western side of the river is a large partially destroyed fort, with gargoyle statues and guards patrolling the top of the walls. You can see a large arch through the northeastern end of the structure, with a large fire in the center of the courtyard beyond. There is some form of magical event occurring in the southwestern part of the fort. In the distance to the south, a bridge over the river is guarded by two death hounds or two armored dogs, one on either side of the bridge.

Descending to the cavern floor, you will find plenty of vegetation and fallen trees. Backtracking to the north, you will encounter two hanging moss on your right hanging from the path you just descended. Continuing north along the river, you will find two red mountain flowers, a bleeding crown, and a fly amanita. Returning to the bottom of the stairs, you will need to dispatch the death hounds or armored dogs. Be careful, as killing the first will likely alert the second. Between the stairs and the bridge to the south are two more white cap mushrooms. Past the bridge to the south you can find another bleeding crown, and by ascending a slope near the bleeding crown you can find a fly amanita.

After crossing the bridge to the western shore, there is nothing of interest to the south. Almost directly opposite the bridge are two more red mountain flowers and a bleeding crown against the wall of the fort. You will be able to hear some of the guards talking to each other above you. Heading north, there is another bleeding crown to your right on the shoreline, followed by two more red mountain flowers also near the shore. Continue north to reach the large arch you could see from the ledge. Past the arch against the outer wall is another white cap, and farther around the wall to the northwest you will find an area where the wall has fallen and been replaced by a wooden bridge over the gap to enable those on guard to traverse the entire wall. From this point you can access the courtyard, and see the wooden stairs opposite leading up to the top of the wall. The fire in the center of the courtyard makes the entire area brightly lit, making sneaking difficult. If you are a vampire, a member of the Dawnguard and an armored troll will be standing near the fire.

You can find a single white cap mushroom in the courtyard between the wooden stairs and a door partially blocked by fallen masonry. At the rear of the courtyard to the west is a second smaller fire, with ascending spiral stairs to the right and a balcony above. Before climbing these stairs, to the left of the fire in the corner against the wall is an apothecary's satchel on a barrel. There is a guard on the balcony, who can be alerted by fighting in the courtyard or on the walls. At the top of the spiral stairs, you will see the magical barrier holding the moth priest in front of you; this was the magical event you could see from the first ledge. There is also the corpse of one of the Imperial soldiers designated to guard the priest on the far side of the barrier.