This article is about the vampire version of this quest. For the Dawnguard version, see Prophet (Dawnguard).

Seek out Lord Harkon as directed by Garan Merethi at the end of the previous quest. The leader of the Volkihar is in his chambers, located east of the entrance to the Cathedral. Question him about wanting to speak with you, and he will let you in on his plan to end the sun's tyranny: "Yes, I did. When I told you that I was grateful for my daughter's safe return, I told the truth. But I did not tell you everything." There are two options, both of which end up at the same place. If you tell him you suspected as much, and he will respond: "Good. Strong instincts and a cunning mind will serve you as well as blade, spell or claw." If you instead ask when he plans to start trusting you, you'll be told: "Do not presume to tell me who I can and cannot trust. I possess the wisdom of a dozen lifetimes, and I will make my own judgements. Now be silent, and hear what I have to say." 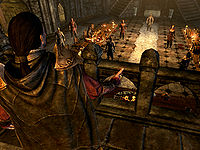 Now, he will speak of his plans, and your part in them. After the monologue, follow him to the balcony overlooking the main hall of Volkihar Keep, where he will give a speech to the other resident vampires. He will command them, and you, to find a Moth Priest, as Moth Priests are the only people able to read Elder Scrolls:

"Scions of the night! Hear my words! The prophesied time is at last upon us. Soon we will claim dominion over the sun itself, and forge a new realm of eternal darkness. Now that I have reclaimed one of my Elder Scrolls, we must find a Moth Priest to read it. I have spread false rumors about the discovery of an Elder Scroll in Skyrim to lure a Moth Priest here. Now it is time to see if those efforts have borne fruit. Go forth, and search the land for rumors of a Moth Priest within our borders. Look to the cities. Speak to innkeepers, carriage drivers, anyone who would meet a traveler. Go now, and carry out this task. This is my command!"

As Harkon said, there are two potential sources to check out: innkeepers and carriage drivers. Serana will approach you after the speech and give you another lead: the College of Winterhold. According to her, wizards always know about things people shouldn't know about. She will also request to accompany you on the trip, as she is feeling restless after being trapped underground for so long.

In Pursuit of a PriestEdit

When you do as Harkon and Serana suggested and talk to the people of Skyrim, you have a few options. Carriage drivers are the easiest: all of them know immediately what you are talking about, and they are positioned outside all the major cities. You'll have to pass a Speech check to get the information for free; otherwise it will cost you.

Have you seen a Moth Priest?

"That's one of them Imperial scholars, right? Old man with a gray robe?

"Might be that I have, but I can't say for sure. I got enough troubles on my mind just tryin' to scrape by out here."

At this point you have several options:

Innkeepers are another choice; however, only Corpulus Vinius or Sorex Vinius at the Winking Skeever in Solitude and Hulda at The Bannered Mare in Whiterun have a clue, and they require a Speech check (50) or a bribe as well.

Heard anything about a Moth Priest passing through?

"Have I heard anything? It was the talk of the city for three days straight. Ain't too often we get a visitor like that.

Where is he now?

"Oh, he just left a short while ago. He said he'd finished up his work and it was time to move on. That's all I can tell you. He asked me not to let anyone know where he was going. I suppose he didn't want the attention."

At this point you have several options:

It takes a bit of travel, but Urag gro-Shub, the librarian at the College of Winterhold will tell you there is a Moth Priest in Skyrim for free: "The obvious answer is to go to the Imperial City. The Moth Priests make their home in the White Gold Tower. Sometimes they go out looking for Elder Scrolls. Lucky for you, there's a Moth Priest in Skyrim right now, doing just that. He stopped in to do some research in the library, then left for Dragon Bridge. If you hurry, you might catch him there." He will always tell you this regardless of your standing at the College, though College quests like Containment and The Staff of Magnus can block this dialogue.

Once you have arrived in Dragon Bridge, ask the guards or townspeople about the Moth Priest. Many of the adults in town will tell you they don't know anything but others, such as Azzada or Michel Lylvieve will direct you to a guard. Some guards may not have the dialogue option, or only respond "A Moth Priest?" and not say any more, while others will realize what you're talking about and tell you what you want to know: "Ah, so that was a Moth Priest, then? He rode through town not long ago with an escort of soldiers. They didn't stop, just headed south across the Dragon Bridge."

The most reliable method is to find the only child in town, Clinton Lylvieve. He will be excited to share the information with you: "I don't know what a Moth Priest is, but I did see an old man in a robe not long ago. He was riding in a wagon with some Imperial guards. They didn't stop to visit, though. They rode through town heading south, and went across the big bridge. It was only just a little bit ago. I bet you can catch them if you hurry up."

Head across the Dragon Bridge and make your way south along the road until you come across a wrecked carriage. Among the wreckage are a dead horse, a bloodstained corpse, a copy of the book Effects of the Elder Scrolls, and a dead vampire. Search the vampire to find a note directing you to Forebears' Holdout, a ruin up the hill to the northeast. Follow the blood spatters, and when you reach the four standing stones, the entrance is to the north. 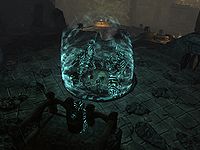 The barrier with the Moth Priest inside

Inside, you will see what appears to be a ruined underground fort inside a large natural cavern divided by a river. Past the fort, you may notice the large blue-green orb on the platform; this is your target.

Head left down the stairs and across the bridge. There is a Dawnguard warrior patrolling the walls of the fort, and more enemies inside, including an armored troll. However you wish to deal with them, make your way to the interior of the fort, climb the stairs and head across the platform to the orb from before. It is actually a magical barrier, and it contains the Moth Priest, Dexion Evicus, trapped inside. If you are stealthy enough as you go up the stairs, you can overhear a conversation between a Dawnguard lieutenant and his commander:

Kill them, and search the corpse of Malkus, located between the barrier and the west wall, for the weystone focus. With this in hand, go up the western stairs and find the weystone source on another platform overlooking the barrier. Activating the source with the focus in your possession will drop the barrier, and Dexion will emerge, chanting, "I serve my master's will." His demeanor will then change: "But my master is dead, and his enemies will pay!" He attacks you with all his might, so fight back until he yields. While he is kneeling, use your Vampire's Seduction power on him. Activate him after this to feed on him and make him your thrall. He will be awestruck: "By the divines! It's as if my eyes have been opened! I am blinded by the light of your majesty. I... I must obey you. What would you have of me, master?" Order him to travel to Castle Volkihar, where you must return as well.

When you arrive, your new thrall will be waiting in the main hall, along with your fellow vampires. Talk to Harkon at the far end of the hall. When you tell him what you have done, he will say, "Yes, I see that. I trust his capture was not too difficult a task?" You then have three options; whichever one you choose, he will then give you your next instruction: "Well, your thrall awaits and we have given him the Elder Scroll. Command him to read it, and let us hear the words of prophecy together."

Order Dexion to read the Elder Scroll, and he will be excited: "Ah, yes, the Elder Scroll! I admit, I'm looking forward to this." Then he will produce the Scroll and read from it, leaving you with more questions than answers: