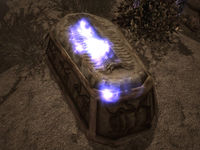 Something is wrong at the graveyard.

With his steward killed, his tower withered, and several other annoyances related to ash spawn, master Telvanni wizard Neloth finally loses his patience when three ash spawn attack his tower. Once you have killed the ash spawn, enter the tower and talk to the wizard who will reveal it is finally time to investigate who is behind the attacks: "Yes. I have enemies. Legions of them back in Morrowind. However, in this case I have reason to believe it is someone in Solstheim." When asked if he wants the responsible persons dead, he will respond: "Not yet. That may come later. First I need to identify the culprit. I've enchanted this ring to find the source of the attacks. Here, take it." He will then hand you the Ring of Tracking and explain that you need to wear it in order for it to work. The ring was enchanted with a bit of ash from the last ash spawn attack and will allow you to follow the magical link back to the source of the summoned ash spawn. However, it has its disadvantages: "The link is weak, so you'll have to be within about a hundred feet of the source." Neloth will then order you to walk around the grounds while wearing the ring. Equip the ring and leave the tower behind.

Once outside, head north to the field of mushrooms and then east towards the evergreen tree until you reach a small graveyard inhabited by a peaceful netch family. With the ring equipped, one of the coffins will have a clear bluish glow. As you approach the graveyard, the expected ash spawn will appear and attack, so fight it and investigate Ildari's sarcophagus. The coffin lacks a dead body, and contains a staff of calm and a heart stone. Grab the stone and return to Neloth in the tower. 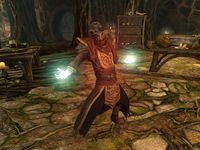 "She lives. Seek her in Highpoint Tower."

If you have already played through March of the Dead, the name Ildari should be familiar, due to the journal you found when you helped Captain Veleth with his ash spawn problems in Fort Frostmoth. When you hand the stone to Neloth, he will be quite surprised and reveal Ildari Sarothril to be a former apprentice of his: "Ildari? Then it's my own fault. She was my apprentice before Talvas. She volunteered for one of my experiments involving heart stones. It was quite annoying when she died." He will then elaborate on how she died: "My necropsies of Spriggans led me to believe that a heart stone could be implanted in a person's chest, granting them great power. I was considering replacing my heart with a heart stone. Fortunately Ildari offered to let me operate on her first. Of course this was before your briarheart expedition. Now I know that I did the surgery all wrong." When you tell him that the sarcophagus was empty, he will be quick to put two and two together: "That's impossible. Wait... unless she didn't actually die! The heart stone could have kept her right at the edge of life and death. Could it be? Could Ildari still be alive? Could she be my nemesis? Wait a moment while I cast a more specific divination." Moments afterward, Neloth will cast a spell that will light up most of the tower, and will start to talk in a completely different voice, as if a spirit is talking through him: "She lives. Seek her in Highpoint Tower." Neloth will then return to normal and immediately order you to head to said tower, as he can't be bothered himself. The last thing he will say is: "Go rip that thrice cursed heart stone from her chest." 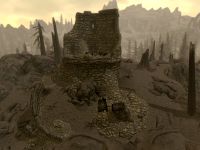 Highpoint Tower is located north of Ildari's former hideout, Fort Frostmoth, southeast from Brodir Grove. Enter the tower via a tunnel on the north side; fight the guarding ash spawn and head up the stairs. Once inside, head down the spiral staircase. Two stories down, you will come across a table with Ildari's Journal, vol. I, where a weakened Ildari Sarothril describes how she was saved by some miners, and how she is planning her revenge on her former master back in Tel Mithryn. Continue down the stairs and head west until you reach a chamber, filled with egg sacks from various spiders. As you enter the chamber, beware of the spellcaster trap to the north, as it can complicate your battle against the spiders considerably. Multiple paths are available here; the tunnel to the south leads to a huge spiders nest and some useful veins, while the tunnel with the spellcaster trap is the way towards your goal. At the first intersection, enter the room with the three ash spawn and pick the fight, then proceed to the north and remove the soul gem from yet another spellcaster trap. In the next chamber, a tripwire triggers some falling boulders. Use the arcane enchanter if needed, and beware the elemental rune in the center of the room. Head down the eastern path until you reach the rare sight of an elemental rune on the wall, with tunnels leading north and south. Head south until you reach a jail-like area with several cells.

The table in the center of the jail has Ildari's Journal, vol. II, detailing how Ildari was able to survive Neloth's operation, and how her paranoia against the very people who saved her slowly increases due to the heart stone implemented in her chest. She also describes how she will keep a few of them as prisoners for future experiments. Before long, Niyya will call to you from her cell. When you pick the lock, she will come out and thank you: "Thank you for rescuing me. That witch was going to kill me soon, I just know it." She will then tell you the background: "We were digging in these mines when she found us. She was hurt so bad. We took pity on her and nursed her back to health. She repaid our kindness by attacking us in the middle of the night. Those of us that didn't die were made prisoners." She will go on to explain how Ildari used her saviors for experiments and will angrily encourage you to make her suffer a painful death. She will then rush towards the exit, with plans to leave Solstheim for good. 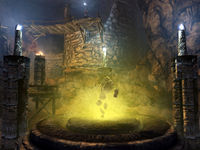 An ash guardian is born

Return to the elemental rune, head north and locate the passage to the east. In the next chamber is a glowing sapphire geode on the ground, while another can be reached by traversing up the wooden structure. Proceed forward in a northwestern direction until you reach a large chamber with a strange device in the middle. Before long, Ildari will speak from her spot above: "You've gone far enough. Neloth is a fool to think he could send some low life to finish me off." With these words, she will activate the device, creating an ash guardian. At this point, numerous ash spawn will emerge as well, so pick the tough battle and dispose of the ash guardian. With the area cleared, start traversing the woodworks to the southwest and explore the path thoroughly for some treasure and ingredients. Once you reach a ledge with a table and a copy of Nchunak's Fire and Faith(?), loot the shelves for various potions and other loot and read through Ildari's Journal, vol. III. In this final volume, Ildari describes how she patiently started getting her vengeance on Neloth, and how she is responsible for the death of Varona Nelas, and the withering of Tel Mithryn tower. Proceed to climb the woodworks and follow the tunnel leading southwest, killing all the ash spawn that emerge on the way. 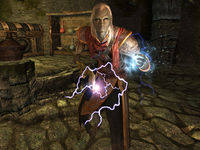 Once you reach a broken-down wall, two paths are available. The path to the northeast leads to a dead end and an open chest with some minor loot while the adjacent path leads to a wooden bridge. Cross the bridge and follow the tunnel as it twists and turns until you reach the final chamber, the lair of Ildari Sarothril. Ildari will be on the woodworks above and will have two elemental traps shooting at you at all times. Dodge the magical attacks and locate the entrance to the southwest and follow the path as it leads you to the second floor. Ildari will now start attacking you. She is a powerful sorceress with several spells at her disposal, although she will mainly use her staff of lightning bolts to attack you. After the battle, Ildari will kneel down. With Ildari helpless, follow Neloth's orders and rip out the heart stone from her chest, forever ending her vengeful scheme. Once everything is quiet, claim a reward from the boss-leveled chest and search the shelves for jewelry, ingredients, and other loot. Activate the lever and watch the spikes disappear from the entrance to the southeast. Head up the stairs, to the very top of the tower, and pull the chain for a very quick escape route back to Solstheim.

Back in Tel Mithryn, Neloth will be happy to see the end of his nemesis and will, for once, reward you accordingly: "Well, well. You have proven to be a more valuable ally than I anticipated. I have a staff for you, but I would also like to make you a member of my household. A member of House Telvanni. No need to thank me. I know you are overwhelmed with gratitude." He will then hand you a random, leveled staff and tell you that your new membership of the household means very little for the time being, although he will promise you a bed and a chest in his tower (see bugs).