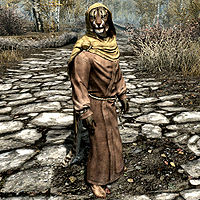 M'aiq the Liar is a Khajiit well-known for his (often humorous) comments on the Elder Scrolls series, as he (or a relative) has also appeared in both Morrowind and Oblivion. He will make witty comments about the game's strong points, smart remarks to common complaints about the game, or just general references to different aspects of the game. A wanderer, M'aiq may be found in a number of random areas, either around cities or roaming the wilderness. When encountered, he may say a multitude of different things. After he utters three of the clever phrases listed below, if you try to speak with him again, he will only say either "M'aiq is tired now. Go bother somebody else." or "M'aiq is done talking."

A common greeting when you first meet him or enter conversation.

"M'aiq knows many things, no?"

A hint at M'aiq's vast knowledge.

A recurring quote, referencing the one in Oblivion.

"What does it mean to combine magic? Magic plus magic is still magic."

This and the next line reference changes to the magic interface, such as custom spells available in Daggerfall, Morrowind, and Oblivion. This refers to pre-release talks that the new dual-wielding system might also include the ability to combine spells, a feature that is not present in the final game.

"Too much magic can be dangerous. M'aiq once had two spells and burned his sweetroll."

This refers to 'Dual Casting', which overcharges double-casted spells. Also, the "sweetroll" is a running gag occurring in many Bethesda games, being mentioned in both Elder Scrolls and Fallout games.

"Much snow in Skyrim. Enough snow. M'aiq does not want any more."

Referencing the fact that Skyrim was originally promised to have dynamic snow that built on surfaces. This is present in the final game to a small degree, but really only changes textures to snowy textures instead of accumulating a physical pile of snow.

"Skyrim was once the land of many butterflies. Now, not so much."

This might refer to the fact that you can catch butterflies, or it could be a reference to an apparent bug from early in Skyrim's development where butterflies would not despawn and would quickly flood the game world.

"Snow falls. Why worry where it goes. M'aiq thinks the snowflakes are pretty."

Referencing how the new physics behavior system works, particularly snowflakes forming 'snow banks' in this case. Alternatively, it could be referring to the fact that snow (and rain) clips through most objects so it can be snowing underneath a shelter.

"M'aiq carries two weapons, to be safe. What if one breaks? That would be most unlucky."

Referencing the dual-wielding system introduced in Skyrim. Additionally, he may also be referring to the fact that Skyrim does not have the durability mechanic used for weapons and armor in previous games.

"M'aiq is always in search of calipers, yet finds none. Where could they have gone?"

A reference to Oblivion, in which M'aiq would stop whatever he was doing at noon each day to spend five hours looking for calipers.

"M'aiq hears many stories of war... yet few of them are true."

A possible self-criticism by Bethesda, whose system of creating characters made scripted 'major' battles unrealistically small. This was a major complaint for the main quest of Oblivion, as well as for the Civil War quests of Skyrim.

"M'aiq has heard that the people of Skyrim are better looking than the ones in Cyrodiil. He has no opinion on the matter. All people are beautiful to him."

Referencing the completely revamped and improved character designs in Skyrim.

Probably a reference to criticisms that the NPCs in Oblivion would often have inane conversations about Mud Crabs.

"M'aiq does not understand what is so impressive about shouting. M'aiq can shout whenever he wants."

A reference to dragon shouts, which are unique to Skyrim.

"Why do soldiers bother with target practice? One learns best by hitting real people."

Referencing the skill leveling system, in which the player must hit valid targets in order to gain experience in combat skills.

"Something strange happens to Khajiit when they arrive in Skyrim."

This may perhaps refer to the drastic redesigns of the beast races for Skyrim.

"Werebears? Where? Bears? Men that are bears?"

A reference to one of M'aiq's lines of dialogue in Oblivion which referenced werewolves. This is also a reference to the presence of werebears in pre-existing Skyrim lore, which led some fans to the hope that players might be able to become werebears in Skyrim. Dragonborn added hostile werebears as well as the ability to summon one of your own.

"Dragons were never gone. They were just invisible, and very very quiet."

A reference to his line in Morrowind saying that you have to fly high to see dragons because "the ones near the ground are very hard to see, being invisible". Or possibly a reference to how Skyrim initially handles dragons: they are technically present in the game data but disabled by scripts until the appropriate point in the main quest.

"M'aiq once walked to High Hrothgar. So many steps, he lost count!"

A reference to the legendary 7,000-step mountain path between Ivarstead and High Hrothgar. Also possibly referencing Todd Howard's claim that he would take the time to count all 7,000 steps.

"M'aiq does not remember his childhood, perhaps he never had one."

"M'aiq is very practical. He has no need for mysticism."

Referencing the fact that Oblivion's Mysticism spells were reassigned to other magic trees.

This is a joke based upon the fact that M'aiq is a Khajiit, who has fur.

"Some like taking friends on adventures. M'aiq thinks being alone is better. Less arguing about splitting treasure."

The newest iteration of a classic quip by M'aiq, in which he criticizes the popular fan complaints about the lack of multiplayer and cooperative play modes in the Elder Scrolls games.

"Some say Alduin is Akatosh. Some say M'aiq is a Liar. Don't you believe either of those things."

Likely a reference to how Skyrim has changed the lore concerning Alduin. Prior to Skyrim, it had been established that Alduin was just the Nordic variation on Akatosh, a different view on the same deity; Skyrim reinterpreted this to be a stereotype by non-Nords that Nords do not agree with, as shown in Alduin is Real and The Alduin/Akatosh Dichotomy, and gave strong evidence (such as Paarthurnax's dialogue) that the two are actually distinct beings.

"It does not matter to M'aiq how strong or smart one is. It only matters what one can do."

References the fact that Skyrim characters have no Attributes, such as Strength and Intelligence, that were present in previous games.

"M'aiq was soul trapped once. Not very pleasant. You should think about that once in a while."

Referencing the soul trap spell that a player can use to trap a dead enemy's soul in a soul gem, which is useful for enchanting.

"Nords are so serious about beards. So many beards. M'aiq thinks they wish they had glorious manes like Khajiit."

Reference to the fact that facial hair appears on many NPCs in Skyrim as well as being an option in the character creator, whereas all of Oblivion's characters were clean-shaven with the sole exception of Sheogorath. The Oblivion add-on Shivering Isles also had an easter egg relating to this.

"M'aiq loves the people of Skyrim. Many interesting things they say to each other."

Reference to how Skyrim's larger voice cast and more natural dialogue system marked a significant improvement over Oblivion's lack of different voice actors and diverse and fluent conversations, a major complaint of the community and critics of Oblivion.

"M'aiq can travel fast across the land. Some lazy types take carriages. It is all the same to M'aiq."

Referencing the new carriage system for travel in Skyrim, which was at some point intended to transport you in real time, but ended up very similar to the fast-travel system that was also present in Oblivion. Perhaps also a reference to Oblivion, where after talking to you he would run away at high speed.

"Once M'aiq got in trouble in Riften, and fled to Windhelm. It is good that nobody there cared."

Refers to crime being tracked separately for each area of Skyrim, which means that guards no longer try to arrest you for a crime you committed in another hold.

"The people of Skyrim are more open-minded about certain things than people in other places."

Possibly refers either to the tolerance of necromancy and skooma in Skyrim compared to other provinces, or to the fact that Skyrim's new marriage system allows for both opposite-sex and same-sex marriages.

"M'aiq has heard it is dangerous to be your friend."

Reference to the ability to recruit people as followers whom you've befriended, who will help you in battles and adventures - a very dangerous activity, given the frequent encounters with bandits, undead, dragons and many other life-threatening things. Also may be reference to the fact that there are a few instances in the game where the player is encouraged to sacrifice their followers, such as Boethiah's Calling.

"M'aiq knows why Falmer are blind. It has nothing to do with the Dwemer disappearing. Really."

Refers to lore added in Skyrim which suggests that Falmer living in the lands beneath Skyrim were poisoned and enslaved by the Dwemer, leading the crippled Falmer to rebel and fight the Dwemer until the latter's disappearance.

"M'aiq's father was also called M'aiq. As was M'aiq's father's father. At least, that's what his father said."

Obviously referring to the presence of a "M'aiq the Liar" in the previous two Elder Scrolls games. While it's possible that the ones seen in Morrowind and Oblivion were in fact the same individual given the short time span between those games, this one is likely a descendant, given the 200 year gap since Oblivion.

"How does one know there was a city of Winterhold? M'aiq did not see it with his eyes, did you?"

"Don't try blocking if you have two weapons. You will only get confused. Much better to hit twice anyway."

Reference to the fact that dual-wielding makes it impossible to block.