A werebear on Solstheim 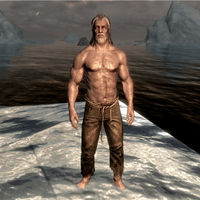 A werebear before transforming 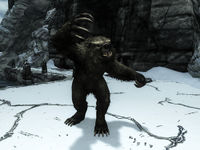 A werebear in combat

Werebears are lycanthropes found throughout the island of Solstheim, specifically in colder areas of it. They are covered in thick brown fur and are found in and out of werebear form, but always labeled as "werebear". Werebears are always hostile towards you and are usually found in groups of two or three.

You can summon one by using the power given to you by the Beast Stone after completing the quest Cleansing the Stones (after using the power you must acquire it from the stone to use it again). There is no way to become a werebear yourself.

Werebears can be looted for honey, honeycomb and human flesh when they die. They wear ragged trousers.