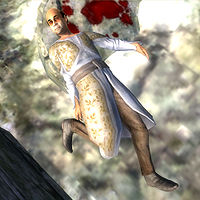 Sheogorath's Punished is a corpse found at Punishment Point. A note on the body declares that the body is one Robert Wisnewski, an Imperial rogue and resident of Bliss, who angered Sheogorath by attempting to grow a beard.

In addition to the decree, the corpse may carry a good range of items. There is a 50% chance it will have a piece of jewelry, and the same chance of there being a piece of Amber. 40% of the time, a piece of Madness ore will be on the body, and a ring and a gem will be found 25% of the time. It always carries a lesser soul gem filled with a lesser soul, along with a few gold coins. The body is clad in brown trousers, a grey tunic and brown loafers.